Reality check: how the better care fund will work on the ground

Faced with more NHS organisations in deficit and emerging challenges with NHS England’s funding for transformation, there are fundamental issues that must be addressed for the better care fund to work, writes David Smith 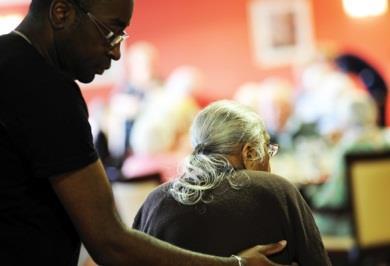 Now that plans for the better care fund have been submitted and reviewed, concerns are emerging that the plans will not deliver the reductions in emergency activity.

There are concerns that the data does not demonstrate how increasing social care spending can cut hospital activity and how well local health providers are involved in developing the plans.

This is also happening at a time when the number of NHS organisations in deficit is rising.

Also last month, Monitor told foundation trusts to revisit their financial plans because they are too optimistic about future growth.

Is the NHS Trust Development Authority saying the same to non-FTs? And to our critical partners in the better care fund? Local councils are seeing their budgets go down and face substantial new financial pressures as a result of the Care Act 2014.

There is clearly something wrong with a planning system that has produced these results.

There will be many people across health and local government in the “I told you it would never work” camp.

Did anyone seriously believe that just by relabelling a pot of money the “better care fund” that organisations would suddenly work together to come up with radical plans to reshape the care system, even when this meant that their own organisations might lose services and money?

So we have the result that we could have predicted: some parts of the country will be developing robust plans jointly with their providers that deliver significant change; other plans will be, at best, window dressing.

We all know that the system we operate can be improved. Just go and visit the medical wards in your local hospital. How many people could have had their admission avoided? Up to 40 per cent?

But to achieve this, there are a whole series of things that have to change.

How do we create a culture focused on what is important to patients and service users, which enables them to live as independently as possible, rather than becoming dependent on services?

The NHS could learn a lot from how adult social care has developed personalisation, giving clients greater choice and control.

But patient stories are what convince me that we have to be brave and resolute enough about changing the system. I will give you two very recent examples. While these are edited versions of the events, these are real stories and I am sure everyone reading has similar examples.

A lady in her 90s living at home has a fall and breaks her arm. She is taken to the emergency department where she is patched up, but she is unable to go home without some care. We put in place a care package, quickly within the four hours, which means she avoided hospital admission.

A brilliant example of the system working well; except that we were able to do this because on the day of her accident, a team of GPs, community staff, hospital doctors, social workers were in the hospital reviewing every patient on one of the medical wards.

‘There will be areas that are able to deliver change in their own areas, and perhaps the pioneers will provide a useful steer’

Then there is the patient who has a crisis due to his mental health condition and needs an urgent assessment by the community mental health team. This does not happen fast enough so the police get involved and the patient is admitted to hospital under section, having endured a ride in a police car.

Undoubtedly, to deliver the aspirations behind the better care fund at a time when the pressure on all parts of the system is rising and the money is going down, is a substantial challenge.

It is a great opportunity as well, but this tests even the most optimistic among us. There will be parts of the country that are able to deliver change in their own areas, regardless of the obstacles in their way, and perhaps the pioneers will provide a useful steer.

However, to deliver the scale of changes required, there are some fundamental issues that have to be resolved and here is my list.

At a time when we need to reduce emergency activity, it is perverse to have an activity based payment mechanism, but scrapping payment by results may not be the answer. Neither is a wholesale return to block contracts, which merely places all the financial risk on the providers.

Many areas are considering using outcomes based contracts, the use of prime providers and alliance contracts.

The financial regime has to be sophisticated enough to deliver change at scale without pushing organisations over the financial cliff edge. We know that passing the financial parcel around the system does not work, yet the system still encourages this behaviour.

How do we incentivise organisations to put the considerations of their own organisation secondary to the needs of the patient and the whole system?

While NHS providers are performance managed on the basis of individual targets, delivery of these becomes more important than the achievement of system objectives.

The NHS system of regulation and performance management based on the performance of individual organisations does not recognise system-wide working.

There is no similar arrangement of centralist performance management in local government, yet councils have a key role in delivering the better care fund.

What are the incentives to get commissioners and providers to develop ambitious joint plans, and what are the sanctions if they do not?

The original suggestion that part of the better care fund was held back and then paid based on delivery of a number of national targets was quickly abandoned.

However, without a mechanism how does the government ensure that ambitious plans are developed and delivered?

4. Who holds the funding?

Do we need to reconsider who holds the better care fund pot?

Leaving the resource with clinical commissioning groups means spending on NHS care is likely to be prioritised to avoid further financial risk in the NHS.

Transferring the resource to councils may force a greater pace of change, although it exposes the NHS to greater financial risk.

There would need to be some safeguards to ensure the money is actually spent supporting out of hospital care and not on other council services, but this could be done by giving this function to health and wellbeing boards, provided they are also given some teeth and powers.

We need more time to develop robust plans with an emphasis on delivery. Of course, we will always ask for more time, but the timetable for producing the draft and final plans for the better care fund was crazy.

How many areas put their effort into writing the plan, rather than developing the way in which the organisations in the system need to work together to implement the change?

Had the Department of Health given us a year to develop a proper plan, and if we can get trusted organisations to do this, maybe we would not now be facing the prospect of a further round of assurance tests.

These are not necessarily intractable issues, but the government and the DH have to decide the extent to which it will seek to resolve these issues at a national level or allow local determination.

David Smith is chief executive of Oxfordshire CCG, and was chief officer of Kingston CCG and former director of health and adult services at the Royal Borough of Kingston upon Thames until June