Patients admitted to A&E in the evening can stay in hospital up to four days longer than those admitted in the morning. To reduce their stays, trusts can take targeted action during the assessment phase, explain Seamus McGirr and colleagues 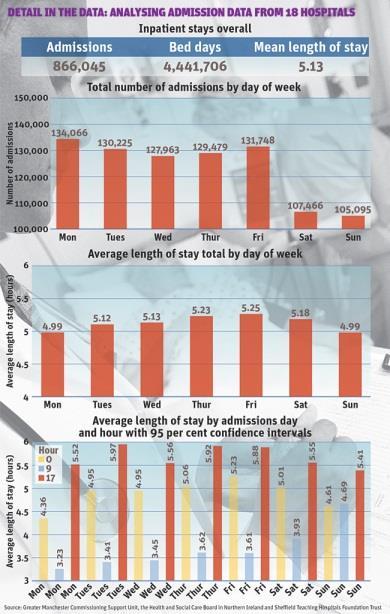 Strategies to reduce A&E length of stay and increase access to ward and community services earlier in the day could significantly reduce healthcare expenditure and improve patient outcomes.

It is clear that hospitals and healthcare systems are busier in the afternoon and evening than in the early morning, and this contributes to admissions, A&E delays, diagnostic delays and clinical assessment delays.

However, the additional delays do not wholly explain the additional inpatient days. The key to reducing length of stay is targeted action during the assessment phase of a patient’s journey.

As different as day and night

Data reviewed from 18 British hospitals found that patients admitted during the evening could stay up to four days longer than those admitted in the morning.

As well as data analysis, direct observation of several thousand admitted patient pathways was undertaken at six of the 18 sites.

We looked at 3.5 million A&E attendances that led to 866,000 non-elective admissions. We found that admission hour appears to be a stronger predictor of length of stay than admission day.

This suggests at least equal attention should be paid to evening cover as it is to that at weekends.

Length of stay is highly sensitive to the ward arrival hour across all specialties and all age groups.

The additional length of stay is not fully explained by on the day congestion, as has been suggested in other studies.

There are many factors that appear to contribute to the longer inpatient stays following an evening admission that our data picked up.

The relative delay before being seen in A&E by emergency physicians and subspecialists approximately doubles every hour from 9am onwards.

For each hour delayed in arriving in A&E, patients experience an increasingly long delay before transfer to a ward.

The average patient must arrive before 1pm to ensure ward arrival before services, in and out of hospital, start to reduce after 5pm. The majority of ambulance arrivals, both following a 999 call and at the request of a GP, are after 1pm.

‘Older people are over represented in emergency department waits’

The increasing delays for assessment in emergency departments and on wards throughout the working day leads to measureable A&E congestion, and hence clinical teams and services are under greatest pressure after noon.

Frail older people have longer trolley waits than younger people and are most likely to have late evening admissions.

Admission numbers are significantly higher Monday to Friday than at weekends for all ages. However, inpatient length of stay is broadly similar by day of admission, with Friday admissions having only a 0.26 day increased stay when compared with Mondays.

Late ward arrival is associated with a longer response time to moderate care needs. In some cases, “clerking” may be delayed until the following day.

At a minority of sites, ward round review is dependent on clerking having been completed. On some sites, patients with non-critical needs have been seen to delay two inpatient nights before consultant review.

Patients over the age of 75 who are referred to hospital by GPs show a peak in ward arrival times three hours later in the day than other admissions. This goes someway to explaining later arrival on wards for all patients but irrespective of age, later admissions lead to significantly longer stays.

Patients admitted between 8am and 6pm have a shorter stay than A&E referrals – two days shorter. Overnight GP admissions (12am-7am) have significantly longer stays than A&E referred admissions at 3-5, or more, days.

Social care packages are rarely stopped for patients attending hospital for emergency assessment and returned home on the same day. However, inpatient admission may trigger the suspension of care packages, with subsequent significant delays before being restarted.

In the midnight hour

Zero day admissions naturally decrease as clinical decisions get closer to midnight, but this is insufficient to explain the extended length of stay of 3-4 days as these patients are invariably reviewed by a senior doctor on the next morning’s post-take ward round.

Of all non-elective ward arrivals, 38 per cent take place between 5pm and midnight when many diagnostic and support services are reduced and clinical teams begin to reduce to evening cover.

‘Senior, early decision making is key and may lead to significant efficiencies in occupied bed days’

The pattern seen was replicated at all the sites reviewed, with the primary difference between sites being the extent of the increase in length of stay for afternoon and evening admissions.

Evening reductions in senior doctor presence, diagnostic capacity and the availability of community services leads to an inability to safely turn patients around on the same day, and adds significantly to length of stay.

Our analysis suggests that senior, early decision making is key and may lead to significant efficiencies in occupied bed days.

The data and hypotheses drawn were shared with the local clinical and management teams that agreed with the conclusions offered. We recommend that trusts and their commissioners should examine local data to establish if the findings outlined in this article apply to them.

Seamus McGirr is director of clinical development and director, Andrew Mullarkey is head of information and Sarah Graham is senior analyst at the North West Utilisation Management Unit at Greater Manchester Commissioning Support Unit; Robert Sowney is assistant director for unscheduled care at the Health and Social Care Board in Northern Ireland; Russell Emeny is director and Dr Vincent Connolly is clinical director of the emergency care intensive support team at NHS Interim Management and Support