Over 450 people a day caught covid in hospitals during January

Record numbers of covid-19 infections which are likely to have taken place after admission to hospital are being reported in January, HSJ can reveal.

HSJ analysis shows an average of 462 covid cases probably caught in hospital have been reported every day throughout January – the highest rate since NHS England first began routine reporting of this data in August.

A total of 11,094 likely hospital-acquired covid-19 cases have been reported in the first 24 days of January, the latest data available. This is already higher than any other month in the second and third waves of covid.

By comparison, there were 9,729 probable hospital-acquired covid-19 cases throughout the whole of December – which had the second-highest total – when an average of 313 nosocomial cases per day were being reported.

January has recorded more than a third – 34 per cent – of all probable hospital-acquired covid cases recorded since the beginning of August, whilst December recorded 30 per cent. 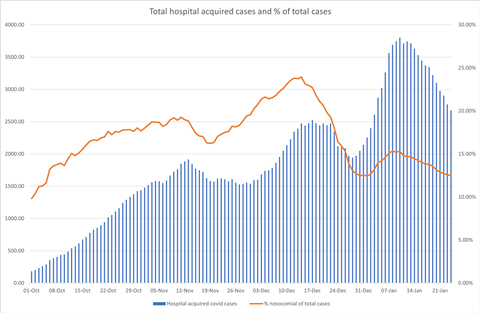 HSJ analysed the number of patients who first tested positive for covid more than seven days after they were admitted. According to NHSE and international definitions, these patients are likely to have acquired the virus in hospital.

The number of covid infections after admission reflect the significant pressures acute hospitals experienced during the height of the third wave in early January, with the sheer weight of patients being admitted making infection prevention and control very difficult.

However, there are signs of improvement. The latest weekly data shows the number of covid infections likely to have been caught in hospital fell by 20 per cent in the last week, from 3,371 to 2,675 in the same time period.

An NHS England spokesman said: “Hospital infection rates track covid cases in the community and every hospital is asked to rigorously follow regularly updated PHE guidance on infection prevention and control. The number of outbreaks in hospitals has fallen according to most recent published PHE data, and the public can play their part too by following government hands, face, space guidance.”