Two-thirds of the private sector capacity that was block-purchased by the NHS — costing hundreds of millions of pounds — went unused by the service over the summer, despite rocketing long waits for operations, according to internal documents leaked to HSJ.

Since the start of the coronavirus pandemic, the NHS has had unprecedented block contracts in place for almost all the private hospital capacity in England. The total cost has never been revealed, although public contract notices suggest they are worth around £400m per month.

The contracts were welcomed by the independent sector, which saw a substantial drop in patients seeking private care at the start of the pandemic.

In the spring, the contracts mainly enabled staff and equipment to be borrowed by NHS hospitals to cope with demand from covid patients, and put private hospitals on standby in case NHS facilities were completely overwhelmed. 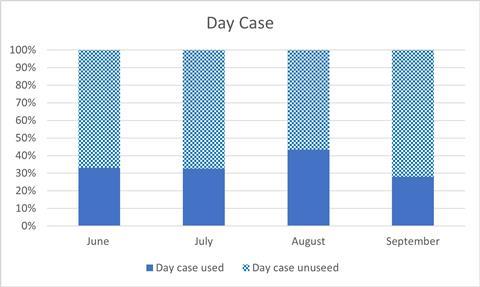 But from June onwards, as the NHS sought to recover disrupted services to “near normal” levels, there was a national drive to try to use the private hospitals to start carrying out large amounts of planned non-covid treatments on behalf of the NHS.

However, the documents leaked to HSJ suggest this broadly failed throughout the summer, indicating the NHS got poor value for the many millions spent on the contracts once the danger of the first wave had passed.

The documents detail how much “capacity” private providers said they had and how much was used across day cases (operations not requiring an overnight stay), diagnostic tests, and outpatient appointments. These categories represent the vast majority of activity normally carried out privately.

The leaked figures suggest only around a third of the capacity on offer from the providers in these categories was used between June and the end of September (see charts).

Although there was a gradual increase in utilisation between June and August, usage dropped significantly again in September.

The data obtained by HSJ also suggested that only around a third of chemotherapy capacity was utilised, despite huge concern about delays for some cancer patients and their safety going to NHS facilities while covid is still spreading. It did not include usage data for inpatient stays, but the raw activity numbers for this followed a similar trend to day cases, suggesting limited growth.

Well-placed senior sources told HSJ that the the low usage across the summer was due to poor communication and confusion in the NHS about how to use the contracted capacity, and NHS trusts being slow to restart their elective programmes following the first peak of coronavirus. It can also be a difficult process to transfer patients to new providers.

Local officials have been told that 10 providers were removed from the national contract due to “poor utilisation”. It is thought these included HCA Healthcare UK, and that the others were largely small London-based providers. 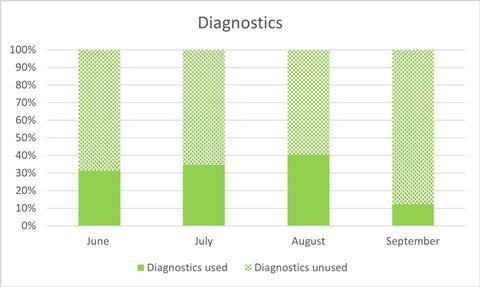 The nature of the contracts meant the private sector received a set amount of money for making the capacity available (based on their running costs), rather than payment depending on how much work they carried out.

Waiting times for planned care have increased steeply since the winter, with 40 per cent of patients on waiting lists in September having waited for longer than 18 weeks, compared to 17 per cent in February. In diagnostics, the proportion of patients waiting more than six weeks has increased from 3 per cent to 33 per cent. The number of people waiting longer than 52 weeks has rocketed.

One NHS source closely involved with the implementing the contract said other officials within the health service did not work well with private hospitals to make use of them. The source also claimed the health service itself did not need the capacity. The senior manager added: “The national contract for private sector capacity was for the company shareholders, not for NHS patients.”

The bulk of the contracts were given to Spire Healthcare and Circle Health (which acquired BMI Healthcare last year), two of the largest private healthcare providers.

Over the four month period from June to the end of September, there were around 147,500 day cases performed under the contract, 614,000 outpatient appointments and 219,000 diagnostic tests, the data shows. There were also around 38,000 chemotherapy treatments and 32,000 elective admissions.

The Independent Healthcare Provider Network, which represents private providers, said in a statement: “Where utilisation by the local NHS has been poor, independent sector providers have pro-actively raised that with those systems and where needed up through the regional and national NHS England teams.”

It said private providers have hit or exceeded the “vast majority of activity expectations” set by the NHS, while any profits that were made were returned under the terms of the contract. 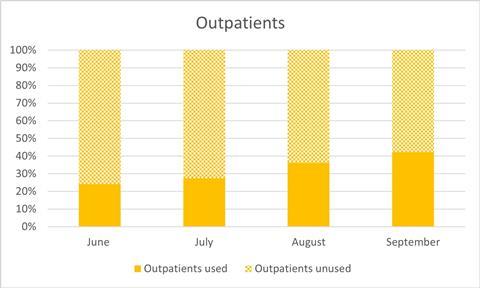 It said the contracts ensured the NHS had access to “vital buffer capacity during a period of considerable uncertainty and challenge”.

A spokesman for NHS England said: “Independent hospitals’ NHS funded elective activity has substantially increased during the autumn.” NHSE also indicated that in September the private sector was carrying out a large amount of appointments.

The national block contract is now being replaced by a procurement framework in which local leaders are expected to use to commission private capacity locally.

An HCA Healthcare UK spokeswoman said its work within the deal meant that ”over 14,000 time-critical NHS patients were able to get the care they urgently needed, including complex cardiac and cancer surgeries” but that: “As we are no longer part of  the national NHS contract our focus is back on the provision of independently funded care.”

The HSJ Strategic Estates Forum provides an environment for senior attendees to better understand what options are available to upgrade their estate to better meet their clinical needs and strategic plans.The HSJ Sustainability Forum will bring together decision makers and sustainability leaders across the system to discuss a holistic approach to building a greener NHS and positively impacting local populations. Learn from leaders across the system, and discuss how best to collaborate to drive carbon emission reduction, build service resilience, and take a sustainable approach to healthcare.