4
Paperless NHS supplement: Efficiency – out of the box
Supplement Archive

Paperless NHS supplement: Efficiency – out of the box

Board members often have to deal with huge documents clogging up their email inboxes. Claire Read reports
on systems that make key papers easier to access – and also promote collaboration 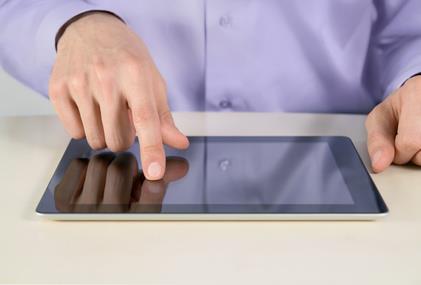 When it comes to the level of attention boards are paying to informatics and IT, Justin Whatling is allowing himself something resembling cautious optimism.

“It does feel like it’s changing,” reports the senior director of strategic consulting, population health at Cerner who also serves as chair of BCS Health at the Chartered Institute for IT. “I still think it’s very patchy, but generally I think it’s improving. The situation isn’t as bad as I thought it was a year ago.”

He wasn’t the only one with concerns 12 months ago. In January 2014, just 29 per cent of those responding to an HSJ survey felt that health secretary Jeremy Hunt’s 2018 target for a paperless NHS was a realistic one.

The major reason most were sceptical? The NHS leadership community’s lack of IT knowledge. Ninety one per cent of respondents said it could place the 2018 target beyond reach.

‘It has made a huge difference to how effective we are, and how responsive our board meetings can now be’

We repeated the survey at the beginning of this year. This time, 69 per cent of those responding said they didn’t feel the NHS leadership community had enough knowledge about the potential benefits of IT systems. It is far from a positive result, but arguably not as worrying as last year’s.

End of an era

Dr Whatling suggests that “there are probably a few drivers in the system which means boards are taking IT and informatics much more seriously”. He points to the approaching end of contracts originally signed as part of the National Programme for IT – and the consequent need for trusts to suddenly take on direct responsibility for this IT – as well as incentives from the centre such as the technology funds.

“So I think the movement is quite positive in boards thinking about information and technology, and how it can help them,” he concludes.

At Birmingham and Solihull Mental Health Foundation Trust, that thinking has extended to how IT can make the work of the board itself more efficient. Since June 2014, the organisation has largely dispensed with the use of paper during its board meetings. Instead, it uses a software solution running on iPads to distribute and view papers.

According to Sandra Betney, the drive behind BoardPad’s adoption was similar to that behind the health service’s more general desire to go paperfree. “The efficiency of the way we managed the board was part of it – the administration and the cost of running meetings,” the trust’s executive director of resources explains.

“But it was also ease of access, particularly for non-executive directors, and stopping having papers flying around by email and people’s inboxes getting filled up.”

‘We had a major tender going on and we wanted people to be able to see the submission as it was being built up. Because it was on BoardPad we were able to do that’

Since introducing BoardPad, the need for bulky print outs – or huge emails – has been eliminated. Instead, the papers are uploaded to the software and then visible to any member of the board via an iPad.

The lack of reliance on hard copies has made other differences too.

“For instance, we had a situation where a paper had already been published onto BoardPad and there was an issue with it,” explains Ms Betney. “Normally that would mean going to the meeting slightly embarrassed and saying I’ve got to table an amendment, whereas now we managed to just put a new version on to BoardPad and everybody had read it before they got to the meeting.”

Collaborating and commenting has also been made easier, she says. “To give you an example, we had a major tender going on and we wanted people to be able to see the submission as it was being built up. Because it was on BoardPad, we were able to put the papers on there for the board to see what was happening as the submission was being worked up, and to be able to comment on it.

“You wouldn’t have done that with papers; you wouldn’t have said: ‘We’ll just print you out a set of papers every week’, it would just have been ridiculous. So it gave a greater transparency to some of our processes that we wouldn’t have had without using it.”

It is notable that the drivers for removing paper from board meetings, and the resulting benefits, mirror those expected from a wider removal of hard copies from the NHS. But even more notable is that so do the challenges: not least the thorny issue of information governance.

“I think the boards were really keen to go paperfree, but some have been quite frustrated by the constraints that we as an organisation have put in place,” says Ms Betney.

“So because of the constraints that we’ve put around information governance, we haven’t got BoardPad up and running on anything other than trust-issued iPads, and nor do we want other software from other organisations running on our iPads.

“So some of our non-executive directors in particular, while they were keen to go paperfree, have been saying: ‘I don’t understand, why can’t I look at emails from my other job while I’m on this iPad?’”

Initially problematic too were some of the classics of new IT solutions: the forgotten password among them. “Which you wouldn’t think would be a major challenge, but believe me it is when somebody can’t get into their board papers two minutes before the meeting is due to start,” admits Ms Betney with a laugh.

But there is little doubt that, on balance, she feels that a paperfree board is a good thing. “I think it has made a huge difference to how effective we are, and how responsive our board meetings can now be to new information that comes out.

“We literally have had things going on the BoardPad hours before and we’ve still been able to have the discussion, whereas if you were waiting to print a load of papers, you just wouldn’t get there. So I think it has changed, in a way, the kind of organisation that we are. It’s increased the level of paperlessness you might expect in the organisation.

“The organisation is very clear that we are heading towards paperless,” she adds. “So BoardPad does fit in in that sense.”

Attendees of board or committee meetings will know that papers distributed prior to the meeting can be 100-plus pages long. Reviewing them to make informed decisions can take a significant period of time.

But what about putting together the pack in the first place? The process of preparing board papers and delivering them on time is complex and time consuming. It can also be stressful when last minute changes to agenda items or documents need to be distributed to board members.

‘Producing and distributing digital board papers eliminates the costs of photocopying, printing, binding and courier deliveries’

When considering switching to a digital board pack, directors should ask themselves questions such as will productivity increase, will the adoption save time and/or money, and will it be more secure than our current practice?

Recently, there has been a significant shift in the NHS towards eliminating paper. Health secretary Jeremy Hunt wants the NHS to be paperless by 2018, with a view to increasing efficiency and improving patient care.

Certainly, the use of technology is not a new concept in the NHS. With the rapid development of iPads and Windows devices and the way healthcare professionals use them to receive and consume high volumes of information, it is worth considering using them to manage board meetings and papers within organisations.

The digital challenge is all about choosing the right technology to support and deliver best patient care. A well informed and efficient board can, without doubt, make better decisions to support both healthcare professionals and patients.

Meanwhile, producing and distributing digital board papers eliminates the costs of photocopying, printing, binding and courier deliveries, not to mention the time and resources required to collate the material in the first place.

More and more company secretarial teams within the NHS are interested in finding a comprehensive solution that could help them efficiently and cost effectively produce and distribute board packs.

The paperless revolution has already started within the NHS. Why not lead by example and introduce it to the boardroom?
Mike Evans is chief executive officer of ICSA Boardroom Apps Limited.
www.boardpad.com