1
Exclusive: Government overruled concerns with 999 IT system
Technology and innovation

Patients have died after the government overruled multiple safety concerns raised about an IT system used to triage 16 million NHS patients a year.

An HSJ investigation has uncovered at least three instances where patients triaged by the NHS Pathways software died months, sometimes years, after central agencies were alerted to safety concerns by ambulance trusts – but declined to make changes requested.

NHS Digital – the organisation that oversees NHS Pathways – told HSJ it had assessed the complaints but made changes only where “clinically necessary”. It has repeatedly asked coroners to “strike from the record” concerns raised about the safety of NHS Pathways’ advice.

Since 2015, coroners investigating 11 patient deaths have called for changes to the NHS Pathways software, used by NHS 111 and 999 services to triage patient calls, to prevent future deaths.

Among the cases uncovered by HSJ, two women – Caragh Melling, 37 and Barbara Patterson, 67 – with agonal breathing died on 27 December 2014 and 2 January 2015 respectively after NHS Pathways was used to triage their calls. Agonal breathing is sudden, irregular gasps of breath, requiring immediate CPR.

However, between 2010 and 2014, at least three different ambulance trusts raised concerns with the national NHS Pathways team on four occasions about the software failing to advise call handlers to identify life-threatening agonal breathing.

In both the women’s cases, ambulance trusts told the coroner no changes were made to address their concerns about NHS Pathways before the deaths.

In a report sent to NHS Pathways’ clinical director in April 2016 regarding Ms Melling’s death, the coroner stated: “NHS Pathways were contacted in 2014 to raise the absence of the breathing analysis tool as being a cause for concern. No action appears to have been taken. I also understand that the medical director of the ambulance trust has again raised concerns at the national level, but it is unclear whether any action is being taken.”

However, NHS Digital told HSJ some changes were made to the early assessment of patient breathing in 2014, ahead of the two deaths.

Both the Department of Health and Social Care and NHS Digital claimed that, despite concerns raised by ambulance trusts, there had been no faults in the system for treating agonal breathing and any fault lay with call handlers, not the software. Responding to HSJ, NHS Digital confirmed it declined to make changes to agonal breathing requested by a provider in 2014, over concerns it would delay CPR.

It is not clear whether ambulance trusts’ concerns about NHS Pathway’s handling of agonal breathing have been resolved. NHS Digital said further amendments were made in June 2015, 2016 and 2017.

In a separate case, another coroner raised concerns with NHSE in July 2017 after the death of Colin Sluman, 68, the previous year. Among other recommendations, the coroner said changes were needed to how NHS Pathways prompted call handlers to ask whether a patient was alone to prevent future deaths.

NHS England responded to the coroner in August 2017 saying it had raised these concerns with NHS Digital’s lead clinical author for NHS Pathways, Darren Worwood, who declined to make any changes and had said responsibility for assessing whether a patient is alone was with 999 and 111 providers.

In September 2018, another man, John Scott, died and a separate coroner again raised concerns, this time directly with Mr Worwood, about the way NHS Pathways advised call handlers to deal with patients alone when calling.

In its response to the coroner, NHS Digital again said determining whether a patient was alone was the responsibility of 999/111 providers, not the NHS Pathways software.

The NHS Pathways software is updated twice a year but it is unclear whether these updates directly address concerns raised by coroners and NHS providers about the treatment of patients that are alone and those exhibiting agonal breathing.

One ambulance trust told HSJ that improvements would be made to NHS Pathway’s advice concerning patients alone this year, or possibly early next year. However, NHS Digital has previously stated no change was required.

When approached by HSJ to respond to these deaths, NHS Digital said there had been no faults in the NHS Pathways system in agonal breathing and patients alone cases and blamed any failures on local 999 and 111 providers not using the system correctly. In some of the other deaths raised by coroners, NHS Digital agreed to make changes to the software.

NHS Digital said: “We take any coroner’s report we receive very seriously and work with our partner organisations across the NHS to ensure that we respond appropriately and make the necessary changes to the system if required. It is categorically untrue that there are any cases where concerns have been raised and changes have not been made to the system where they have been deemed clinically necessary.”

However, the organisation would not share the NHS Pathways incident log with HSJ, which would provide a full record of users’ concerns raised with NHS Digital. It said it would take too long for staff to extract the information requested by HSJ.

Responding specifically to concerns raised about agonal breathing, NHS Digital said it “strongly refuted there was a problem with the system” and said, in the case of Mrs Patterson’s death, ambulance call handlers “were not probing adequately in assessing the breathing pattern”.

What is NHS Pathways? 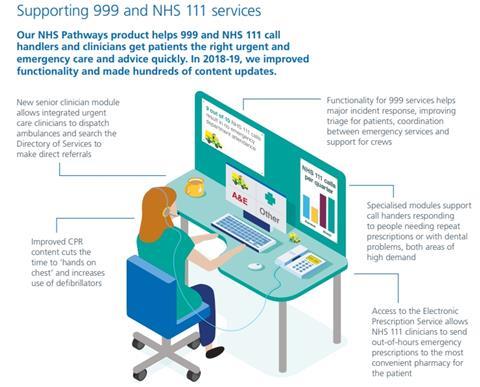 NHS Pathways is a piece of clinical software, run by NHS Digital, that is used to assist non-clinically trained call handlers to elicit information, offer advice and dispatch medical assistance based on a patient’s call.

It is used to triage all NHS 111 calls in England and many, but not all, 999 calls. Overall, it is used to assess and triage more than 16 million calls a year.

It also powers NHS 111 Online, a website and app that allows patients to enter symptoms directly into the software and receive triage advice without human involvement. Launched in 2017, NHS 111 Online has been used a million times and, as of February this year, accounted for one in 10 uses of NHS Pathways.

NHS 111 and 999 providers are expected to strictly adhere to prompts and scripts in the software, or risk losing their licence to use it. However, in some instances, providers have created local workarounds where they feel there are gaps in the advice offered.

The software covers more than 800 symptom pathways and its content is overseen by a national clinical governance group, hosted by the Royal College of GPs, which regularly reviews and updates the content twice a year.

NHS Digital has told HSJ, when potential issues are raised about the software, a clinical assessment is made within 24 hours. When changes are needed to NHS Pathways, these changes are independently clinically assessed and tested before going live.

The investigation also reveals that several ambulance trusts have created “local workarounds” to fill gaps in the advice offered by NHS Pathways. This was despite many saying their call handlers, who have no clinical training, have no discretion to deviate from the NHS Pathways advice, and one claiming any deviation would risk NHS Digital withdrawing their licence to use the software. In February this year, a coroner told NHS Digital: “There appears to be a contradiction between the call handlers being told they have no discretion when using NHS Pathways and their being given additional guidance for certain calls. This contradiction could cause confusion.”

NHS Digital said: “NHS Pathways is not a ‘scripted’ system where there is no ability to deviate from the exact wording presented. Call handlers are trained to form appropriate ‘probing questions’ when needed, or to rephrase questions safely and effectively.”

Neither NHSE nor the DHSC answered questions posed by HSJ regarding the process for responding to specific safety concerns raised about NHS Pathways, including in cases where patients later died.

In a statement, a DHSC spokesman said: “We take any concerns raised by coroners very seriously and as part of our long-term plan we want the NHS to be the safest healthcare system in the world. Where coroner reports are issued to the department for a response, we work with the relevant bodies to ensure concerns are carefully considered and learnings are identified, so that appropriate action can be taken.”

An NHSE spokesman said: “Assessment systems used by 999 or NHS 111 services are regularly reviewed by clinical experts to ensure that they classify a patient’s needs as accurately as possible, based on the answers given by the person making the call, and therefore give them the right response or advice.

“While incidents like these are therefore extremely rare, where concerns are raised they are clinically investigated and any necessary changes made.”

Coroner’s documents, statements from NHS 111 and 999 providers, statements provided to HSJ by NHS Digital, DHSC and other agencies