As regular readers may recall, End Game wholeheartedly welcomed the British Medical Association’s plea that, at this election time, politicians refrain from using the NHS as a political golf ball.

Actually, we pondered whether the BMA, being a large and powerful interest group, as it is, was wholly above playing political games with the beloved service itself.

We were thrilled that, only a few weeks after making its plea, the doctors’ union boss Mark Porter appeared on page one of The Guardian claiming that the NHS’s finances were so awful that the next government would have to consider charging patients for basic care.

In other words, he suggested that the founding principles of the NHS are under threat.

Having set out this grim scenario, on the front page of a national newspaper, Dr Porter called on the next government to resist the temptation of bringing in user charges.

His intervention forced the three main parties to insist that they would not introduce charges, regardless of financial pressures.

Well done, Dr Porter; good outcome, we say, and we’ll hold them to it after polling day.

Obviously, it doesn’t count as game playing when the message is pure and the impact positive. 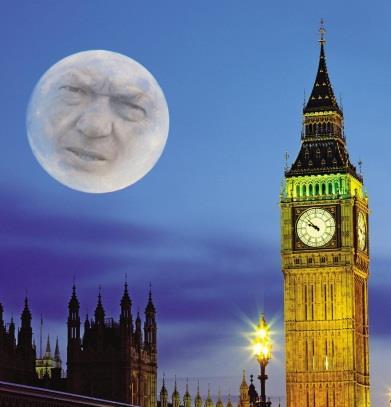 Tredinnick’s taste for medical moonshine has spread beyond Westminster

End Game spat its cornflakes out when we read that more than £200,000 was spent on homeopathic treatments in Bristol last year.

Homeopathy has long been a niggle in End Game’s tail, kept alive by alternative medicine fanboy and MP David Tredinnick’s vocal support for the “awesome power of the moon”.

‘Commissioners had funded the services’

Earlier this month, local newspaper The Bristol Post reported that commissioners had funded the services, provided by South Bristol Community Hospital, to treat patients with conditions such as asthma, eczema and digestive problems.

Who knew that sugar pills could rack up such a hefty bill?

In the spirit of early preparations for next winter, End Game has a request to make in advance of when the darkness descends for quarters three and four of 2015-16 and the numbers of emergency admissions and people on waiting lists almost inevitably increases.

We hereby declare that the word “unprecedented” and the phrase “highest ever” are banned for matters where the medium to long term trend is consistently upward.

Politicians and media alike have been guilty of referring to “unprecedented demand” or the “highest ever accident and emergency attendances”. This is appropriate where the increase is at least slightly unexpected, our new guidance will say, but in many cases the statements are equal in absurdity to “an unprecedented number of years have passed since the birth of the universe”.

The new guidance will be enforced by an emboldened End Game systems resilience group, and is subject to hourly reporting.

Some normal people have the same names as famous people - not too unusual a fact to note. And End Game is loathe to bother you by flagging up such matches, but this time we’ve outdone ourselves.

West Essex Clinical Commissioning Group has not one, but two cultural titans on its senior management team.

Picture the scene conjured by this otherwise dry board paper write up: “Stephen King queried whether there was an improvement or deterioration in the run rate as this was not clear from the report. Stephen Fry noted from the [Continuing Healthcare] section in the performance report that the volume of outstanding reviews has grown significantly.”

Whatever next, “Ernest Hemingway asked Ernest Borgnine to consider [commissioning for quality and innovation]”?

Picturing in the times of elections 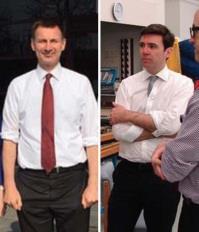 On a roll: forearm slams in evidence as Hunt and Burnham go toe to toe

Nothing says “I mean business” during an election campaign quite like a good rolled up sleeves photo opportunity.

Left, we can see two prime examples of the art, from health secretary Jeremy Hunt and his shadow counterpart Andy Burnham.

We’ll let you decide which candidate kept to the clinical guidelines the most during their hospital walkabouts, but it’s safe to say we’ll be seeing a whole lot more political arm wrestling before 7 May.