Past, present and future productivity in the NHS

Higher performance bought with heavy investment in the NHS is in jeopardy from arbitrary cost cutting in the name of efficiency. Andrew Street reports 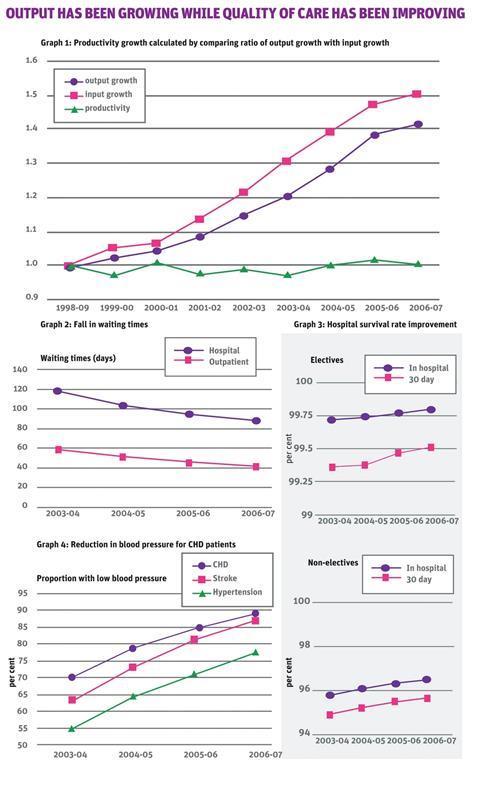 The English NHS has received significant increases in funding over the past few years, but what have we got for our money?

In the past, we would have struggled to answer this question with any degree of precision, because measures of output were quite crude until the mid 1990s. For instance, the contribution of the NHS included in the national accounts was a simple count of the number of patients treated in 12 different settings. This disguised the fact that patients admitted to hospital, for example, differ markedly in their complexity and care requirements and ignored any improvements there might have been in the quality of their care.

But England is now at the forefront of international efforts to measure healthcare output accurately. Two characteristics stand out.

First, the measure of NHS output is comprehensive, capturing as far as possible all the activities undertaken for all NHS patients by both NHS and non-NHS providers. Based on information in the hospital episode statistics and reference cost returns, 6,630 different categories are now used to describe patients. Compare this with the consumer price index, used to measure inflation, which is based on a “basket” of just 650 goods and services.

Second, the measure of output includes improvements in the quality of healthcare, captured by indicators such as survival rates, waiting times and disease management. When patient reported outcome measures become available it will be possible to capture improvements in health status more accurately.

Since 1998-99 there has been strong input growth, particularly after 2000-01: staff had new pay awards; recruitment increased, partly to satisfy the European working time directive; and there was greater investment in equipment and buildings.

Meanwhile, output growth has unsurprisingly lagged behind input growth. The directive limited working hours, reducing the number of patients per doctor, and facilities invested in take time to build.

The year on year increases in patients treated has meant that output growth averaged more than 3.7 per cent per year up to 2003-04. But the net effect was negative productivity growth between 1998-99 and 2003-04.

Not only are more patients being treated, the quality of the care has also been improving. For example:

There has also been a slowdown in input growth since 2003-04. This is primarily the result of a levelling off in staff recruitment and less reliance on the use of agency staff.

As a consequence, recent NHS productivity growth has been positive or, at least, constant. This means NHS output growth is at least as high as the growth in inputs.

What might this mean in a period of more constrained resources? There is a danger that across the board “efficiency” savings may translate simply into commensurate reductions in the number of patients treated or in the quality of the care they receive.

To guard against this, it will be important to examine variations in productivity in different parts of the country so efforts can be aimed where most gains are to be made.