North by North West: Was ‘Devo Manc’ a success?

Politicians, NHS regulators and, yes, the media, routinely focus too much energy and attention on waiting times — while ignoring efforts made to improve the underlying causes of poor health.

In his sign off as leader of Greater Manchester’s ‘devolved’ health and social care system last week, Jon Rouse criticised this imbalance, suggesting much of the region’s progress over the last four years has gone under-appreciated.

Although one might view this as a natural response to consistently poor performance against the highest profile waiting time standard (for accident and emergency, which GM was signed up to delivering), Mr Rouse surely has a point here.

While not denying the importance of the four-hour target (and the strong evidence that it saves lives), there are a host of lesser known but arguably just as important indicators that Greater Manchester has focussed significant energy and resources on.

In the next few editions, North by North West will attempt to quantify the progress, or lack of progress, that has been made across a wide range of indicators, including the waiting time standards.

Given the region’s unique £450m transformation fund from the NHS, it seems fair to expect an above average improvement in GM across a range of areas.

The allocation of that funding makes it difficult to draw direct links and neat conclusions, because while half is easily tracked and linked to certain measures (more on that below), the other half was distributed to the 10 boroughs with their own priorities and programmes.

But when all considered together, the overall picture from the indicators could start to provide an impression of how successful the whole project has been so far, and how well the transformation fund has been spent.

In this edition, NxNW looks at five measures which give some indication of “early years” health. They are all areas which Greater Manchester has referred to in its own strategies and planning documents, and for which data was available to make comparisons.

Of the five measures, this is the most directly related to specific investment that’s been made. Smoking during pregnancy presents serious health risks to developing babies.

It presents a modestly positive picture for Greater Manchester, which can point to specific investment that started in 2017-18, and appears to have helped narrow the gap with the rest of England. GM has also made better progress than its immediate neighbours and the rest of the north. 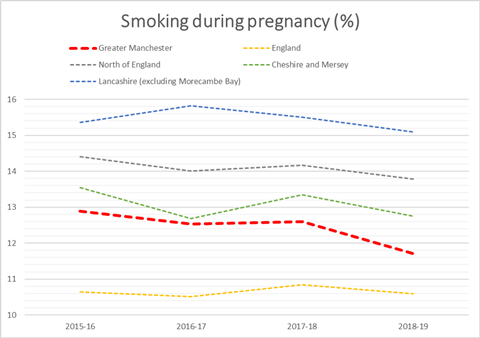 One potential outcome of smoking during pregnancy is low-birth weight (under 2.5kg) which is associated with an increased risk of infant mortality, developmental problems in childhood and poorer health in later life.

GM seems to have had an alarming spike in low weight babies in 2017-18, some of which was cut back in 2018-19 after the specific smoking cessation investment was made. (I’m told the rate of stillbirths is actually now deemed a better indicator than low birth weight, but there are no figures yet available on that measure for 2018-19). 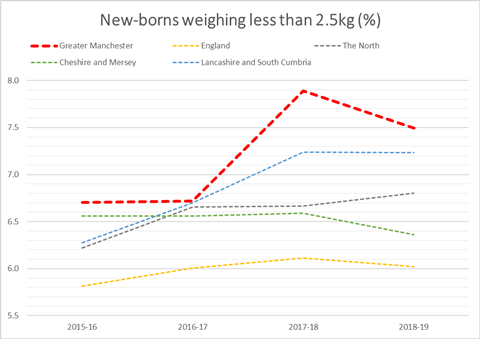 This is another indicator that’s had specific investment since 2017-18, which has gone into oral health packs for health visitors and daily brushing sessions in nurseries.

It’s been focussed on four boroughs: Salford; Oldham, Rochdale; and Bolton. The best measure to look at would be tooth decay, but this data is only collected every two years so we’ll have to make do with dentist visits for ages 0-5 (which are encouraged by the health visitors and nursery sessions).

Again, this appears to show a modestly positive picture, with the four boroughs doing better than Greater Manchester and its north west neighbours since the investment started, although England and the North have progressed at roughly the same rate. Annoyingly, the age-specific data only goes back to 2016-17, so it’s not clear whether the four boroughs were already on an improvement trajectory. 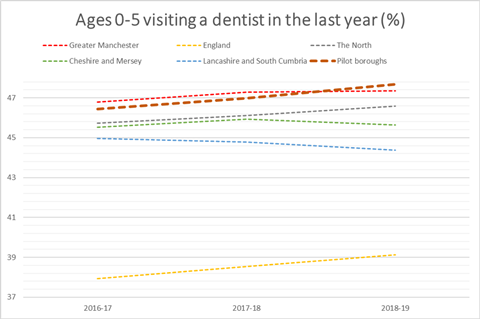 This doesn’t show a good picture for GM. Despite childhood obesity, which carries a host of health risks, being routinely cited in their strategies and plans, the gap with the rest of England has widened.

It’s not clear how much has been invested through the boroughs in reducing childhood obesity so far, but there has yet to be investment at a regional level. 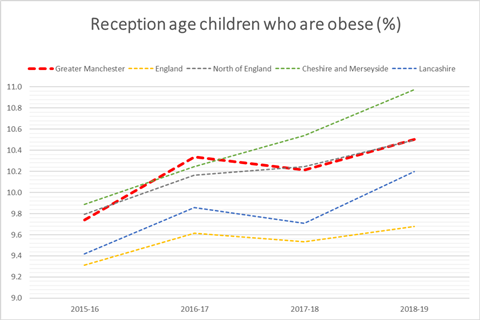 This measures the proportion of reception age children achieving a good level of development across several areas, including communication, physical development, social skills and literacy.

This was a key priority for GM even before the devolution deal, with efforts focussed on children from more deprived households.

It shows a more positive picture, with an acceleration against the rest of the country. Though if you look at all reception age children (not just those receiving free school meals) GM is in line with the national average. 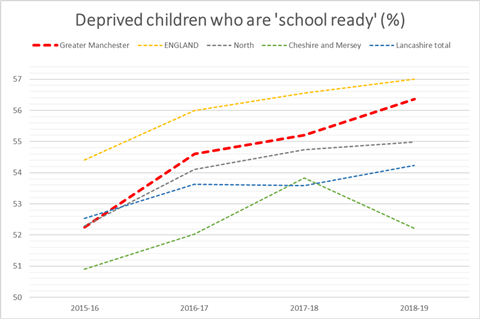 About £270m of the transformation fund was distributed to the 10 boroughs in Greater Manchester, each of which had different priorities and programmes.

The devolution team suggested each borough was likely to account for their spending programmes in different ways, so it will be difficult to link them to the region-wide priorities.

The rest has been allocated at a regional level, including these investments in “early years”:

Yet the data does provide a useful early indicator and starting point for further scrutiny.

Wait to see the rest in forthcoming North by North Wests before deciding. You might think there would be benchmarking data readily available and easy to check, but tracking it down and collating it is a pretty laborious and fiddly process. So, bear with me.