Exclusive: London will be overwhelmed by covid in a fortnight says leaked NHS England briefing

London’s hospitals are less than two weeks from being overwhelmed by covid even under the ‘best’ case scenario, according to an official briefing given to the capital’s most senior doctors this afternoon.

The NHS England presentation, seen by HSJ (see slides below story), showed that even if the number of covid patients grew at the lowest rate considered likely, and measures to manage demand and increase capacity, including open the capital’s Nightingale hospital, were successful, the NHS in London would be short of nearly 2,000 general and acute and intensive care beds by 19 January.

The briefing forecasts demand for both G&A and intensive care beds, for both covid and non-covid patients, against capacity. It accounts for the impact of planned measures to mitigate demand and increase capacity.

After some very small demand control measures, total demand is projected as 17,100. The briefing then sets out ways the capacity might be increased. These measures include the NHS finding another 400 beds, and the independent sector 50. These would be complemented by 1,000 “step down beds”, some of the supplied by the opening of the capital’s Nightingale hospital, and 150 freed up by specialist trusts.

The briefing shows that as of 5 January the London NHS had an “unmitigated surplus” of 720 general and acute beds, 5 per cent of its total. Just over 40 per cent of its G&A beds were occupied by covid positive patients.

The intensive care, or “adult critical care”, model follows the same pattern as that for G&A beds.

Under the “best” scenario, the number of covid positive patients rises to 1,600 and “total unmitigated demand” to just over 2,000.

Mitigated capacity is projected to be 1,660, giving a “deficit” of just over 400 intensive care beds.

The briefing shows that as of 5 January the London NHS had an “unmitigated surplus” of just 46 ICU beds, three per cent of its total. Just over 70 per cent of its ICU beds were occupied by covid positive patients.

Options to avoid being overwhelmed

In a statement given to HSJ this evening, Dr Diwakar said: “Hospitals in London are coming under significant pressure from high covid-19 infection rates which is why they have opened hundreds of surge critical care beds and are planning to open more, including opening the London Nightingale.

“While staff are going the extra mile to care for patients it is crucial that people do everything they can to reduce transmission of the virus.”

HSJ understands that the briefing was part of an attempt to get senior clinical leaders to focus on what they would have to do, if current growth trends were not surpressed by the tighter lockdown.

Options that have been floated include very signficantly reducing the number of non-covid patients by cancelling more elective work and/or sending those patients to other regions or private providers, in the capital or elsewhere.

Pursuing such options may be limited, however, with other regions also seeing rapid growth in covid occupancy caused by the new strain of the virus spreading acoss the country.

HSJ understands the medical directors discussed opening up further capacity within the capital over and above that contained in the briefing, but that lack of available staff meant this was unlikely to succeed.

In the first wave, London peaked with about 1,160 covid patients in critical care. It is now just short of this figure, on 1,075. In the spring, total available critical care capacity was put at around 1,550. At one point it was claimed this could be “super surged” much further – to at least double this – but it is unclear if that was truly possible. It would require radical dilution of staffing and standards of care. 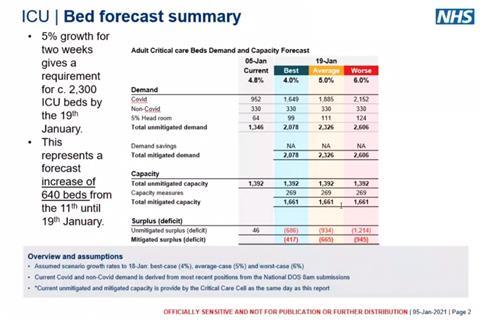 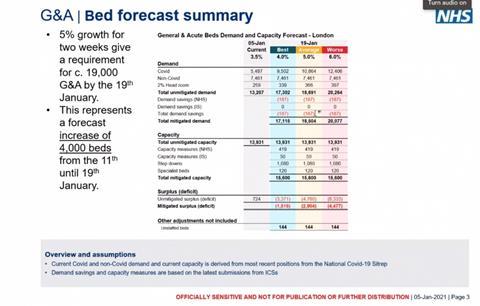