The sustainability and transformation plan for Cheshire and Mersey includes the downgrade of at least one accident and emergency department, along with a major consolidation of elective care, according to a document obtained by HSJ.

HSJ has seen a version of the region’s STP 21 October submission to NHS England, which outlines a range of projects to close a financial gap of around £900m by 2021. 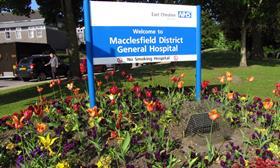 The document, which appears to be the final submission, refers to the downgrade of the emergency department at Macclesfield District General Hospital to a minor injuries and illnesses unit as part of a “remapping” of services at East Cheshire Trust.

The document says there will be a formal “major service review” at Southport and Ormskirk Hospital Trust, and includes options that could reduce the number of 24 hour A&E departments across three acute trusts.

It also refers to major service reconfigurations between Countess of Chester Hospital Trust and Wirral University Teaching Hospital Foundation Trust, including a project to consolidate all elective inpatient care at Clatterbridge Hospital.

The submission, which is described a ”live document subject to regular revision”, acknowledges that many of the plans could face “public resistance and political challenges”.

The plan says there will be a focus on demand management and prevention schemes, with an ambition to tackle high rates of respiratory disease, obesity, alcohol abuse, teenage conceptions, mental health problems and diseases associated with ageing.

Meanwhile, a range of future collaborative models are being considered across the different support services in the region, ranging from “setting up a single wholly owned subsidiary organisation for manufacturing and dispensing medicines” to outsourcing dialysis services to a satellite provider.

NHS England has told STP leaders not to publish their full plans, but some areas have defied this instruction.

The Cheshire and Mersey region has been divided into three “local delivery systems”, called North Mersey, Cheshire and Wirral, and the Alliance. The detailed sections of the STP document are split between the three areas.

The major aspects of the plan for this area are already in the public domain, having been part of the Healthier Liverpool programme.

These include the proposed merger of Royal Liverpool and Broadgreen Hospitals Trust, Aintree University Hospitals FT and Liverpool Women’s FT, and the introduction of a shared electronic patient record.

The submission to NHS England refers to a reconfiguration of 35 adult acute services across the trusts, a significant scaling up of telehealth and assistive technologies, and the development of an “accountable care system” by 2021.

Leaders in North Mersey are also seeking a financial “control total” for the area, which would arguably lessen its involvement in the wider STP.

There are four acute trusts in this patch, and the document refers to the creation of four “accountable care organisations” working in a “collaborative”.

This would be overseen by a “single C&W strategic commissioner”, while a raft of back office consolidations are planned. In some cases this would lead to reduced staff numbers.

The document highlights the current configuration of acute services in Cheshire as being particularly unsustainable.

It refers to a downgrade of the emergency department at Macclesfield hospital, run by East Cheshire Trust, with a minor injuries and illnesses unit provided in its place.

It also suggests that Macclesfield’s elective care and women’s and children’s services would be networked or supported by Stockport FT and University Hospital of South Manchester FT, and says there is an “intention” to transfer high risk general surgery to Stockport from April.

A “remapping” of emergency and elective care is also suggested for Mid Cheshire Hospitals FT, based on a “strategic relationship” with University Hospital of North Midlands.

Countess of Chester Hospital Trust and Wirral University Teaching Hospital FT have already begun discussions over the development of single clinical services, which could include the downgrade of one high dependency unit.

There is also work to develop a shared care record across the footprint, and reduce spending on specialised services by £35m.

The document appears to give a range of options for reconfiguring emergency services across Southport and Ormskirk Hospital Trust, St Helens & Knowsley Teaching Hospitals Trust, and Warrington and Halton Hospitals FT.

All the suggested models note that “new models of A&E delivery” will be considered for Southport and Ormskirk.

The document also proposes a range of single service models across the trusts, a range of “federate” services to reduce agency staffing costs, and elective ward closures due to reduced levels of delayed discharge.

There is also a “vision” for Whiston Hospital to be the single hyper-acute provider for stroke care, and a potential downgrade of one of three high acuity paediatric units.

Louise Shepherd, lead for the Cheshire and Merseyside STP, said in a statement that the submission to NHS England is a draft plan, and the document will be published on November 16 following feedback from national leaders.

Aside from in the North Mersey area, she said the partner organisations have been collaborating for a shorter time and proposals are at an earlier stage. She added: “We would like to stress that there will be significant opportunity for people to have their views heard and to inform the further development of plans.”

Although Ms Shepherd said there are currently no proposals to downgrade A&E services, she added: “The STP does signal intentions in some areas to conduct reviews of current urgent and emergency care services, to assess whether there may be clinical or sustainability issues which should be addressed.

”This may lead over time to options being proposed to change the way some services may be delivered in the future. Any proposals to change A&E services would have to have a strong clinical evidence base and demonstrate a positive impact in terms of quality, safety and sustainability. Patients and the public would be closely involved in the journey to develop any proposals, which ultimately would be subject to a public formal consultation.”