In this week’s North by North West:

Greater Manchester’s performance against the headline accident and emergency target has been a growing concern ever since the devolution project started.

When devo (including a unique £450m transformation fund) was agreed with NHS England and the government, there was a clear expectation that it would enable the region to make faster progress and perform better than the rest of the country.

But its performance against the four-hour A&E target has consistently tracked below the national average since 2015, and it’s starting to fall further behind. 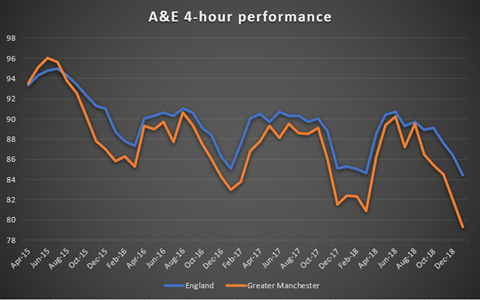 The latest stats show GM had another bad winter, with the four-hour standard being met in only around 82 per cent of cases over November, December and January.

This has now triggered formal intervention from NHS England and NHS Improvement, due to performance dipping below the 85 per cent threshold agreed with GM for three consecutive months.

This is significant because it’s the first time since its launch that the devolution project has been subject to formal interference from national bodies, which is akin to a foundation trust being in breach of its licence.

So far, this has involved a “summit” meeting in mid-February, at which NHSI’s north director, Lyn Simpson, outlined the formalities, while devolution leader Jon Rouse described the various challenges in each borough.

Wythenshawe and North Manchester suffer from staffing shortages, Manchester Royal Infirmary still struggles with flow, Bury is under pressure from the closure of 50-odd community beds, Oldham and Wigan need additional ward space (both were unsuccessful in recent capital bids), Salford’s back door teams lack key staff for out of area discharges, while Stockport seems to have multiple problems.

There is some hope, however, in Bolton’s recent modest improvement, and Tameside’s impressive 93 per cent in the first nine months of 2018-19.

I’m told the meeting and messages were constructive, and there was none of the more traditional performance management behaviours that regulators are sometimes criticised for.

Everyone I’ve spoken to is at a loss to explain why GM’s performance has been so poor, given the progress that’s been made on integration and the transformation investment that’s gone in.

Further analysis will now be carried out by NHSI and the devolution team to look at areas including bed capacity, and to benchmark against similar systems across the North which have performed better.

If there’s some encouragement, it’s that Tameside is probably furthest along the transformation route being followed by the other boroughs, in terms of its integration of commissioning between council and clinical commissioning group; community services (which should be extended later this year when council staff transfer into the NHS trust); and very strong buy-in among GPs.

Bill McCarthy, the incoming joint regional director for the North West, was also introduced at the summit meeting, and GM leaders can probably expect to see much more of him if performance doesn’t pick up soon.

Extensive research by HSJ’s efficiency correspondent Nick Carding has revealed most of the unsuccessful requests for capital funding since the government’s new capital regime started.

One provider missing from the data, however, because it didn’t respond to requests, was Lancashire Teaching Hospitals Foundation Trust.

I understand that a bid went in via the county-wide integrated care system – for around £40m to implement a long overdue reconfiguration between Preston and Chorley (consolidating emergency services at the former, and electives at the latter) – but was unsuccessful.

The trust will just have to keep muddling on with its current estate for now.

The submission also sought to put a marker down of the need for more sizable funds in the future (probably around £500m) to provide a large new hospital in central Lancashire, to consolidate Preston and Chorley more completely into one site. I’m told no location was stated, but the equidistant Bamber Bridge has often been mentioned in the past.

There will be differing views in the county and beyond on whether a new hospital is the way to go, which may well hamper the project’s progress.

Better news for Lancashire was the latest Care Quality Commission’s latest report on East Lancashire Hospitals Trust, which has retained its overall “good” rating and a smattering of “outstanding” ratings within its community division, particularly for specialist child and adolescent mental health services.