Updated: The 58 trusts where covid patients fill at least a third of beds

Thirteen more hospital trusts now have a third or more of their beds filled by covid patients than a week ago, but those under the most extreme pressure have seen it begin to subside.

The total number of general acute trusts with at least 33 per cent covid occupancy in adult general and acute beds was 58 on 18 January (46 per cent) – up from 51 three days ago, and 45 a week ago.

But the number of trusts at 50 per cent and above was six – down from eight three days ago, and 10 a week ago.

This is because most of the hospital trusts whose general beds are at the top end of covid occupancy are now seeing numbers slowly fall, but a wider set of trusts across England are still seeing growth. Eighty trusts had increases in the week to 18 January, 43 saw reductions, and two stayed the same (see heatmap for full list).

Of the 15 trusts with covid occupancy of at least 45 per cent in adult general and acute beds, 10 saw the number of covid patients fall over the seven days to 18 January, and a further two had daily growth of less than one percentage point. Reductions were quite small, however, at a maximum of 2 per cent a day, and this does not include intensive care, where there remains more growth and widespread pressure.

Trusts under the most severe pressure see tentative reductions

But many trusts still saw growth in covid-confirmed patients numbers over the past week – such as Sandwell and West Birmingham and East Suffolk and North Essex in the table above. This includes some with rapid growth, in parts of the south west, west midlands, north west and Yorkshire.

G&A beds make up the core of the hospital bedbase, and NHS England is publishing weekly figures on them, but there are different ways of measuring occupancy, and hospitals’ own operational figures often suggests their covid occupancy is higher than reported here.

Hospitals dealing with covid occupancy of more than 33 per cent are highly likely to be under serious operational pressure. However, this analysis cannot take full account of factors like cancelling elective care, the way beds are counted and reported, or the concentration of covid pressure at particular hospitals within multi-site trusts. Nor does it reflect the number of non-covid patients a trust is treating. Changes to the total number of beds at each trust (both occupied and unoccupied), means the share of total beds occupied can fall in past weeks, compared to previous analyses.

This story is updated regularly. 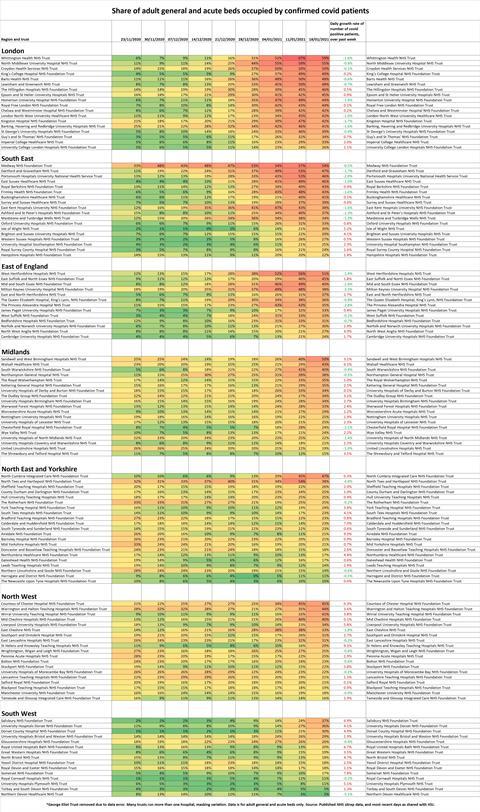 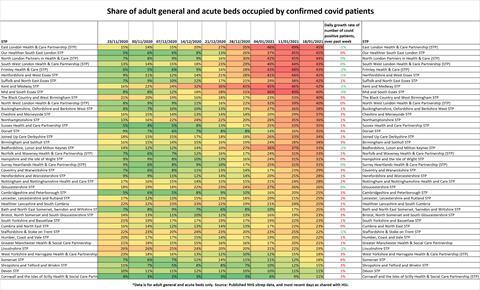