Beware the false solutions to the NHS's challenges

We currently have a glut of statements being made by many in the health service which are questionable and not backed up by fact and they are driving down service redesign. We must challenge these mantras 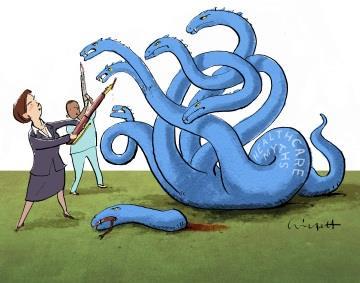 The term “groupthink” is a “psychological phenomenon within a group, which the desire for conformity results in an irrational or dysfunctional decision making outcome. Members reach consensus without critical evaluation of alternative or dissenting viewpoints and by isolating themselves from outside influences”.

‘Sadly, just saying something repeatedly and assertively doesn’t make it so’

We currently have a glut of both, with “magic bullet” thinking evinced to solve a set of wicked and intractable problems in healthcare.

Remember the American journalist and scholar H.L. Mencken who said: “For every complex human problem, there is a solution which is simple, neat and wrong.”

Perpetrators include some big and experienced brains among the “commentariat”. Look no further than the Nuffield Trust’s Wisdom of the Crowd paper, various ministerial pronouncements or even certain articles in HSJ. See also people plugging “solutions” that serve their own commercial or organisational interests.

‘Respect for credible evidence is required rather than spin’

Sadly, just saying something repeatedly and assertively doesn’t make it so. Credible opinion leaders can drive down service redesign, creating costly and damaging dead ends. Realistic expectations are required; as is some respect for credible evidence rather than spin.

By way of illustration, I have set out 10 examples of assertions which have been made repeatedly but are either demonstrably false or where the opposite view is just as valid but rarely heard. I won’t bother making the case for these assertions here – plenty of others have already. I am on the side of the underdog.

1. We have too many hospital beds and the very existence of these beds drives activity into hospitals

Really? We have lost around one-third of our acute beds since 1979; lost them faster than nearly all OECD countries; and have fewer beds per head of the population than nearly all.

Yet urgent admissions have risen year on year during this downsizing and our hospitals run very “hot” and close to capacity – compromising efficiency.

2. The tariff drives hospitals to admit too many patients in order to guarantee income stream

Very dubious. For starters, the devolved nations face all the same issues, and are tariff free.

Second, doctors rather than finance directors admit patients. Do they deliberately admit them to already creaking full hospitals to preserve the business model? So suggests the NHS Clinical Commissioners “manifesto”.

Third, the marginal tariff for accident and emergency urgent admissions/readmissions over 2008-09 levels loses money for acutes.

3. Because bed audits show that 30 per cent of adults in acute beds could be in alternative care settings, we could close the capacity quickly

Hold on! It’s one thing saying that hypothetically they could be somewhere else. It’s quite another to say that there is capacity actually available.

Check the national intermediate care audit or impact of social care funding cuts to see how inadequate current capacity and access to non-acute support services is.

4. Delivering new models of care in community settings will save money and enable hospitals to close or downsize

Whether in respected Cochrane reviews, last year’s Nuffield Trust review of various community health service models, or the NHS Confederation’s own masterly debunking in Dealing with the Downturn, there is precious little evidence that these other models will keep or get people out of hospital beds at the kind of pace the commentariat envisage; nor that these models will be cheaper than being in a bed; nor that any cashable gains will be released without closing whole wards and keeping them closed.

It doesn’t stop people competing to see who can repeat this mantra most loudly, though.

5. Emergency admission of someone with frailty or long term conditions can become a ‘never’ event

No, they really can’t.

Even hospitals that have invested greatly in senior front door assessment, diversion to chair based clinic, etc and clinical commissioning groups that have majored on long term conditions case management find that urgent activity is still on the rise.

‘The issue isn’t making admissions a “never” event; the issue is rather they stay too long’

Many of the patients who make it in are really quite sick. And when it comes to conditions like hip fracture, acute stroke or coronary syndrome, severe sepsis etc, hospital is initially the best and only place for them to be – check the published evidence.

The issue is rather they stay too long.

6. Acute admission rates can be reduced at pace and scale

Yet again this year we have had CCGs, under pressure from the centre and informed by unevidenced consultancy reports, making completely unattainable projections for reductions in urgent activity, which acutes know won’t happen.

7. No one ever wants to come to hospital or be in a hospital bed

This is true of many people.

However, as Ipsos MORI research has shown, local populations have more confidence in their local acute hospital than community alternatives.

As urgent care reviews have shown, people often present to hospital because it’s the one place where the lights are on and they have confidence that something will happen.

And once in beds, many older people and their carers enjoy the support and respite, and it can be hard to persuade to leave. If we were really radical we would allow acute trusts to profit from the public’s confidence in them and help seeking behaviour in crisis.

8. Or be admitted to a nursing home

NHS England chief executive Simon Stevens told a recent Age UK conference that nursing homes could become redundant during his lifetime if only we invested in “new technologies”: a statement that didn’t fill me with confidence in his understanding of real life services or users.

Sometimes a care home is the only viable option.

Often it’s what the person or their family actually choose, and sometimes the alternative to social isolation and a poorly funded care package in unsuitable housing is far worse than being in a well run care home.

9. New technologies will solve the problems in our unaffordable system

This is a particular favourite, especially from the companies who manufacture them and their advocates in government. Of course we need to use electronic records, telehealth and telecare better but the Cochrane reviews and the Department of Health’s own whole system demonstrator trial have shown very limited evidence for clinical effectiveness and cost effectiveness.

The sector’s record working with the DH or the NHS has been woeful and wasteful. What will be different this time around?

10. We can’t deliver innovation in community services without letting the market in

In reality, many innovative service models in community care for older people are beginning to deliver wins. Check out the recent King’s Fund conference on older people’s services for numerous examples.

NHS providers (some part of the acute trusts) are innovating a plenty: we are just slow to adopt the lessons in other health economies.

These models take time to mature. The last thing they need is a year of uncertainty through compulsory tendering, then disbandment.

Let’s have more challenge to mantras and factoids and stop the groupthink. The election isn’t far off.