Budget 2015: The NHS must prepare for more volatility

Despite Simon Stevens’ best efforts with the forward view, the chancellor’s budget announcement could mean more uncertainty for the NHS

The chancellor’s Budget statement on Wednesday was the last of 13 fiscal events in this Parliament. As a fiscal event it was very modest.

The NHS did figure in his speech but it was relatively modest.

There was the very welcome additional funding for mental health services, as was announced by the Liberal Democrats the week before.

He also reiterated his enthusiasm for the Greater Manchester devolution deal and it is clear that the Treasury would like this to be the first of many not a one-off.

Devolution - budgetary integration for health and social care - and a focus on mental health are all likely to be themes of the next Parliament, whoever is in power. These elements of Budget 2015 almost certainly signal a direction of travel which will grow over coming years.

But beyond Wednesday’s headlines and most importantly, the economic and fiscal forecast produced by the Office for Budget Responsibility (OBR), is a sobering counter-balance to the optimistic outlook for the future of the NHS presented last October in the NHS Five Year Forward View. It highlights the huge uncertainties over the outlook for public finances for the next five years.

The first problem – which overshadows everything - is the UK economy’s productivity performance.

The OBR estimates that the trend rate of productivity growth for the UK economy is about 2.2 per cent a year. This fuels economic growth, rising households incomes and funds our public services.

The 2008 financial crash resulted in a major loss of output and damaged our productivity performance.

The government and economists expected productivity to rise over the last Parliament, returning to trend and catching up some of the lost output. The problem is that it hasn’t.

No one really knows what to do to get productivity growing again.

The budget numbers are predicated to be up from 2015. If productivity doesn’t rise, the outlook will be bleak and as the OBR said: “Since it is difficult to explain the abrupt fall and persistent weakness of productivity in recent years, it is also hard to judge when or if productivity growth will return to its historical average.”

If and when it does will have a huge influence on what funding is available for the NHS.

The second issue is the public spending plans.

All the main political parties are committed to eliminating the deficit over the next Parliament.

The coalition plans to get public spending down to around 36 per cent of GDP in line with receipts.  This would take us back to the share of GDP in 1999-00 and 1957-58 – two relatively low points in public spending.

As the chart below shows, most of this will come from cutting spending on public services. 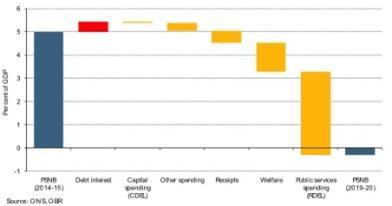 Much of the coverage of the budget has focused on the roller coaster profile of these cuts reductions of more than 5 per cent implied in 2016-17 and 2017-18 followed by a relatively large rise in 2019-20.

So what does this mean for the NHS?

While the profile over the five years clearly matters there is a bigger picture with profound implication.

If tax receipts remain at 36 per cent of GDP and governments wish to set balanced budgets, the increased spending which Simon Stevens called for in the forward view can only come from another big round of cuts to other public services.

How likely is that? Recent research from the British Social Attitudes Survey shows that this approach may have reached its limit.

Since 2008, the UK is the only one of six major developed countries (including the US, France and Germany) where increasing government revenue as a share of GDP hasn’t been a part of deficit reduction.

This reflects the weakness in UK income taxes, which in turn is the result of government policy decisions to reduce tax. Crucially, it is also as a result of the disappointing productivity and earnings growth we have experienced since the financial crash.

Following the general election, the incoming government will need to quickly decide what to do about public spending and the NHS.

If productivity performance across our economy can’t be improved the outlook is truly dire.

But even if productivity rises, the challenge is immense and goes beyond short term deficit reduction.

Can we secure the health system we want, alongside state pension provision, education, defence, police and transport within 36 per cent of GDP and if we can’t what will give – the quality of services or taxation?

There is of course no right or wrong answer to these questions – it’s why we have a democracy to wrestle with these issues.

But resolving them will take time and public debate – a debate which has hardly started.

This debate will be played out against a back drop of political instability – few polls suggest a majority government after May.

Perhaps the main thing we learnt with the chancellor’s budget this week is that despite the very best efforts of Mr Stevens with the forward view, the NHS should prepare itself yet more uncertainty and volatility.

Anita Charlesworth is chief economist of the Health Foundation