Cameras can be the secret weapon to stop care scandals 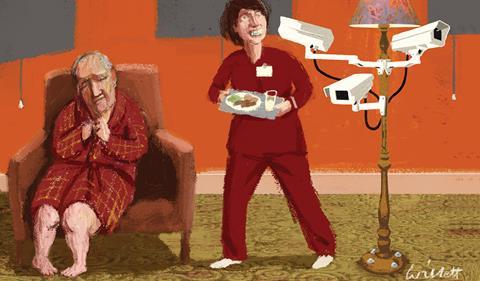 How do we better protect vulnerable people? It is a question practitioners and regulators have been struggling with for the past few years, ever since the BBC’s Panorama programme blew the lid on the horrific practices going on at Winterbourne View Hospital.

Patients there were revealed to have suffered degrading treatment and serious abuses, including significant physical abuse, at the hands of the staff employed to care for them. The intervention by the programme ultimately led to the prosecution of 11 individuals for the crimes, resulting in six jail terms and five suspended sentences.

Earlier this year, Andrea Sutcliffe, the chief inspector for social care at the Care Quality Commission, discussed the possibility of using hidden cameras as one way of tackling harm to adults at risk. Just a week into the job, in October she announced the CQC’s intention to consult on these methods on Today.

Concerns have already been asked about the appropriateness of such a move, and what it will mean for patients receiving care and staff delivering it. The suggestion that people are monitored in their own homes challenges our concepts of privacy and dignity, and could result in a breach of human rights.

Furthermore, the idea that care can be delivered in a compassionate way while Big Brother is looking over your shoulder puts core professional values of trust and respect under stress, and may be an unhelpful challenge to creating positive cultures in organisations.

But the question of whether to introduce these techniques for those at risk of harm is the wrong question. It is those who are most vulnerable in society, such as people with learning disabilities, elderly frail people or people with dementia, who are most susceptible to being taken advantage of, or being abused without anybody doing anything about it.

How does a person with a learning disability and no speech tell someone he has been pushed to the ground and stamped on? Who does an elderly housebound woman with no family tell that she has been raped?

An adult “who is or may be in need of community care services by reason of mental or other disability, age or illness; and who is or may be unable to take care of him or herself, or unable to protect him or herself against significant harm or exploitation” is considered “vulnerable” by the Department of Health. For these people, there is a duty to investigate abuse where local authorities believe it is necessary.

The definition makes sense in that it seeks to describe people who would not be able to, or have serious impediments towards maintaining their own security or accessing police or other statutory services as required.

Those in care have significant challenges to safety that the rest of us take for granted. Though most of us lock our doors when we go to bed, vulnerable people may have complete strangers walking into their bedroom while they sleep. If we are assaulted, we can call the police, tell a family member or to go a GP or hospital.

However, a person with brain injury may not be able to make a choice about what to do or communicate a choice they have made.

Those of us fortunate not to be considered vulnerable can choose whether surveillance equipment is used to combat crime we suffer. The use of cameras and CCTV is now a significant weapon in the armoury of the police to tackle crime against individuals, such as crime to property or threats of violence. Equipment can be installed to record information to be used in evidence, or to deter would be predators.

Furthermore, the ubiquity of CCTV is a reality of modern day life in our towns and cities. The estimated number of appearances on CCTV of any one of us at 300 times each day gives an illustration of the duration we are watched and rightly stirs debate over intrusion into our everyday lives. But many adults at risk of harm are at the other end of the scale from this, perhaps hidden from view from society for weeks, months or even years.

So I welcome this debate, which is more about parity than civil liberty. The Royal College of Psychiatrists is doing much to ensure the health needs of people with mental health problems and learning disabilities are given equal regard to physical health concerns. But there needs to be parity of social regard too.

Providing surveillance techniques to those who are able to make choices while denying them to the most vulnerable is a matter of discrimination. Yes, lets have a debate over CCTV in society, but in the meantime we should consider using techniques already employed in fighting crime for those most vulnerable.

A balanced and judicious use of cameras, deployed in full consultation with the potential victim, family and staff as appropriate, could be a vital tool in ending abuse where it is yet to be unmasked.