The Conservatives will be under pressure next week to respond to Labour’s conference announcements. Speculating on the content of their speeches next week is a mug’s game, but they could well focus on ‘Labour waste’

For parties in government, conference announcements that actually make a difference to our daily lives have three characteristics.

First, they are evidence based – meaning, broadly speaking, that a problem has been identified that is susceptible to policy intervention.

Second, they are capable of being implemented – meaning that a decent chunk of the civil service stands ready to adopt them.

Third, they are funded. 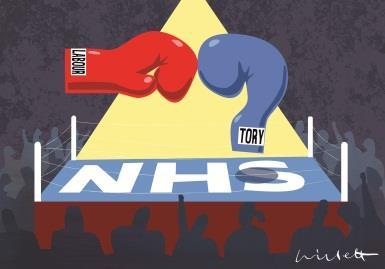 Under pressure to respond

An announcement on the NHS of this type is unlikely to characterise the Conservative Party conference this year.

For a start, conference announcements tend to come from the locker of evidence free policies designed to deliver votes rather than change.

In turn this means they are received by the NHS with a “not invented here” mindset, impeding their implementation. But the most important reason is that there is no money this year – or at least, no money of the recurrent kind needed to make a policy stick.

This was, of course, no brake this week on Labour, which has the luxury of not needing to explain how a national workforce input target can be driven through a locally led NHS.

The Conservatives will therefore be under pressure from some quarters to respond. My inkling is that it will meet the challenge only halfway, with aspirations to continue to protect the NHS.

This is for a practical reason: as a party of government, the Conservatives is constrained by a Treasury that insists, always, that future spending reviews cannot be pre-empted – the source of Labour’s inability to match pound for pound the Conservative’s pledge on NHS spending ahead of the last election.

‘Without much money to play with, we can be sure the impact of an NHS announcement will be limited’

There is also a political reason: the party’s campaign at the next general election is guided by political strategist Lynton Crosby - a man who instructs his team “not to play on Labour’s side of the pitch”.

The Conservatives wanted next week’s conference to be about the economy and its “line to take” on Labour’s pledge this week – “you can’t fund the NHS if you bankrupt the economy” – indicates the determination to do precisely that.

Plenty to fight for

There will be some kind of NHS announcement.

There is a difference between attempting to relegate the importance of a particular electoral battleground and vacating it entirely.

Multiple polls show that the NHS continues to be important to voters, as it always has, and Incisive Health and HSJ’s recent polls both show that, though Labour may have a lead on the health service, Ed Miliband enjoys no such lead over David Cameron. There is, particularly among party leaders, plenty to fight for.

Without much money to play with, though, we can be sure that the impact of an NHS conference announcement will be limited.

Its usefulness will be in indicating where the Conservatives want to take the fight to Labour.

An announcement on cancer would demonstrate a desire to continue to take comfort in the cancer drugs fund.

Further pledges on health tourism or hospital inspections may be designed to please lobby journalists, if not floating voters. An announcement on access, given the NHS’s performance over the summer, would be brave.

Predicting the exact content of an announcement is a mug’s game; advising from afar on what it should be is far easier.

My own recommendation springs from a belief that if a tracker poll on the NHS had existed over a sufficient period of time – and its historic absence is one of the reasons why we now commissions our own – I am confident the vast majority of the public would report that they are both fearful of the NHS being privatised and critical of its inefficiency.

And they would trust Labour with avoiding the first, and the Conservatives with addressing the second.

Regardless of whether this assessment of the parties’ aptitudes is true – or even whether the public’s worries are justified – I suspect that just as Labour’s charges of “privatisation” stick with the electorate, Conservative charges of “Labour waste” do the same.

Here the official statistics (with hotly debated accuracy, admittedly) back the Conservatives in their efforts on the doorstep. NHS managers are down. NHS productivity is up.

This is why I would be arguing for a party conference announcement that both points to this track record and allows the Conservative Party to showcase its anti-waste credentials.

Promises of procurement reviews, a “bonfire of the quangos” and further cuts in administration costs are all things that could be (re)announced at conference at little cost and perhaps littler impact, but which would help to define the parameters of the battle over the NHS over the coming months.

If there is to be a fight on the NHS after all, then the Conservative Party needs to stand on the ground where the electorate has the most sympathy with it.