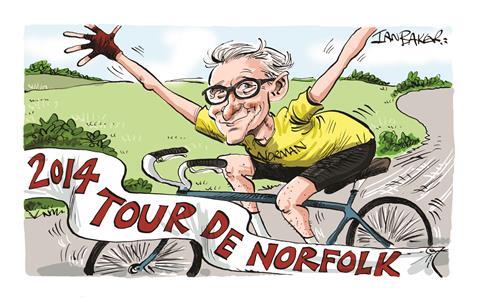 As the rest of the health policy world excitedly tuned in to Labour’s annual shindig in Manchester last week to hear Ed Miliband and Co’s plans to rescue the NHS, the attentions of one notable figure were elsewhere.

While the opposition was peddling its policy to save the service by walloping hedge funds and tobacco baddies, care minister Norman Lamb was peddling a push bike around the country lanes of north Norfolk.

It’s his constituency, you see, and he’d embarked on a two day, 100 mile sponsored cycle to raise money for various health concerns, including Friends of Cromer Hospital and a local charity run community hospital.

End Game welcomes this hands-on approach to tackling the NHS’s financial crisis, and wonders whether many of the ministser’s predecessors might have more productively used their time in this way.

Incidentally, has anyone heard the phrase, “normal for Norfolk”? It’s allegedly used to describe personal attributes that would be considered alarming elsewhere in the country but are unremarkable in that part of East Anglia.

Well, End Game suggests Mr Lamb reclaims it for the 2015 general election campaign. Altogether now: “Norman For Norfolk!” It has a ring to it, doesn’t it? You’re welcome, minister; you can have that one for free.

End Game notes with some interest that Wirral University Teaching Hospital Foundation Trust has launched a tender process for the provision of, erm, £65,000 worth of confectionary products.

What could be the health benefits of such sugary delights? Answers on a postcard please.

Air of resignation in Plymouth

It will not come as news that a number of trusts around the country have been looking overseas to recruit nurses, such is the apparent shortage of practitioners on these shores.

Bad news, then, for Plymouth Hospitals Trust that almost half of the 43 nurses it has recently recruited from Spain and Italy have resigned from their jobs.

Perhaps they feel that the beaches and local cuisine on England’s southern coast simply don’t match up to their sun kissed Mediterranean homelands?

Nope – some of them have decamped up the road to Bristol. The reason? A better airport.

End Game took time out of a busy schedule at Labour’s Manchester jamboree to hang out with various members of the opposition and witnessed first hand the unscheduled demands that are placed on conference bigwigs.

‘It quickly became apparent that they wanted the politician to take the photo, not star in it’

As is customary at such events, activists, prospective parliamentary candidates and old friends all make beelines to the conference A-listers to grab that all important selfie and impart advice.

It is with that in mind that End Game has a modicum of sympathy with the predicament in which one unnamed Labour figure found himself when he left the conference secure zone to saunter briefly back into the real world.

End Game understands a shadow minister was stopped in the street by some overseas tourists gesturing towards their camera. The minister began preparing for another round of impromptu glad handing but it quickly became apparent that they wanted the politician to take the photo, not star in it.

End Game extends its heartfelt thanks to our visitors from afar for inadvertently contributing to one of the hoi polloi’s most crucial roles: keeping the feet of the powerful firmly on the ground.