We have an old waiting times target regime that needs abolishing, but the government can’t do it without letting standards slip, which ultimately means nothing will improve 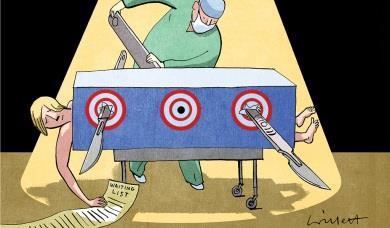 On the one hand we have the bad old target that 90 per cent of admitted patients (inpatients and daycases) must have waited less than 18 weeks. Why bad? Because it is equivalent to ruling that every time you admit a long-waiting patient, you must also admit nine short-waiting patients.

So if a hospital has built up a long-wait backlog, it is penalised if it tries to do the right thing by treating them all as soon as possible. And all that unnecessary queue jumping by the short-waiting patients isn’t fair either.

‘We have a perverse old target that needs abolishing. But the government can’t abolish it without letting standards slip’

On the other hand, in an effort to fix this perversity, a new target was introduced last year. It says that 92 per cent of the waiting list must fall within 18 weeks, which is much better because it deters backlogs from building up in the first place.

This new target is not trouble-free either (some hospitals flatter the denominator by only “validating” their waiting list patients when they pass 18 weeks) but it is a lot better than the old one.

There is another problem with the old target: complexity. As the Commons public accounts committee said last week: “The guidance is complex and allows variations between trusts in the way they manage and record waiting times.” In the body of its report it draws particular attention to the complexity caused by clock pauses, which are only permitted in the old target.

To make matters worse, the old target happens to be much tougher than the new, which is why it was the first to breach at national level under a growing waiting list. If an otherwise well managed waiting list is allowed to grow, by the time it reaches 18 weeks on the old target, waits are still a couple of weeks or so shorter on the new target; hospitals run up against the old target, and its perverse incentives, first.

So despite the introduction of the new target, the perverse old target is still very much out there causing trouble. What can be done?

The obvious solution is to simplify the whole regime by abolishing the old target (along with its twin, the “95 per cent non-admitted”), leaving just the new target and the “zero tolerance” one-year waits target. That would halve the number of targets and sweep away the unnecessary rules around clock pausing. Unadjusted data would still be collected as a cross-check.

But here the politics kick in. The incoming coalition government tried relaxing central controls on these old targets back in 2010, and were promptly rewarded with breaches in early 2011. If they abolished them now, a rapid decline would promptly follow, and the opposition and media would shout very loudly about the fall in standards, target or no target.

In the short term the apparent fall in standards would be illusory (hospitals doing the right thing by treating their longest-waiting patients, shortening waits in real life). But in the longer term it would be real. Remember how 18 weeks on the old target is equivalent to a shorter wait on the new? The English waiting list is growing. Over time, waits on the new target would creep up towards 18 weeks, and that would be a real decline in performance.

So we have a perverse old target that needs abolishing. But the government can’t abolish it without letting standards slip (in a politically sensitive area). So scrapping the target isn’t going to happen, even though it’s the right thing to do.

Alternatively the government could reduce the relative impact of the old target so that it doesn’t kick in first. But it can’t relax the old target without facing all the same criticism as if it had abolished it, so in practice this means tightening up the new target.

‘At a time when the waiting list is growing and targets are already being breached, why would the government want to magnify the problem by making them even tougher?’

Unfortunately the gap is probably too big to cross. It would have to take the new target down to 15 or 16 weeks from referral to treatment, which would allow just over five weeks per stage of treatment for a typical outpatient-diagnostic-inpatient surgical pathway. That is not just a challenge for hospitals; there is also the risk that patients would feel pressured (especially as the new target rightly ignores clock pauses).

In any case, at a time when the waiting list is growing and targets are already being breached, why would the government want to magnify the problem by making the targets even tougher?

Perhaps there is a clever technical solution to be found around clock pauses?

The old target is that 90 per cent of patients must be admitted within 18 weeks on an adjusted basis. The adjustment is for clock pauses after a patient declines at least two reasonable offers of admission. Those clock pauses are a bit of a nightmare to administer, and it would simplify matters greatly if they were abolished. Anyway, clock pauses go against the structure of the 90-something-percent targets, because the whole point of avoiding 100 per cent targets is that it means you don’t need reams of exemptions.

Changing to the equivalent unadjusted target would make things simpler, and give hospitals double the capacity to treat the longest waiting patients on their lists (especially those who have not chosen to be in that position). Those are benefits worth having.

‘Ultimately the best way to improve waiting times is to bring down the size of the waiting list, so all these targets and their perverse incentives simply become redundant’

So that’s sorted then? All we need now is a politician who can explain all that stuff about clock pauses, and how 80 per cent unadjusted is the same as 90 per cent adjusted, in a clear and compelling way without looking slippery. I admit, with regret, that this could be a challenge.

Even worse, it still wouldn’t bridge the gap: even with the clock pauses taken out, the old target would still be tougher than the new one.

Ultimately the best way to improve waiting times is to bring down the size of the waiting list, so that all these targets and their perverse incentives simply become redundant. Then hospitals can focus on managing waiting lists in the interests of patients instead of managing to the target.

Unfortunately, the English waiting list is not shrinking but growing, and while that continues the compromises and perverse incentives are likely to grow with it. There is no sign of that changing any time soon.

So it seems that England is stuck with an unnecessarily complex and perverse system of waiting times targets for the foreseeable future. Unless, that is, a government is brave enough to do the right thing by scrapping the perverse old targets in return for no thanks at all.