The number of patients on English waiting lists grew to a record high in May, although waiting times remained steady.

The waiting list reached 3,174,354 on the official figures, but that becomes 3,394,600 if the most recent figures for non-reporting trusts are added back in.

Waiting lists usually grow at this time of year (don’t ask me why), so the growth was expected. But longer queues generally mean longer waits, so the growth is worrying.

May was the last month before the perverse admitted and non-admitted targets were officially scrapped by Sir Bruce Keogh, and therefore a month when hospitals would have expected large fines for treating “too many” long waiting patients.

But they carried on treating long waiters as if the amnesty on perverse targets had never ended, and the gamble paid off because any fines they would have suffered are now going to be refunded.

The chart shows that waiting times for patients who are still waiting - which is the most meaningful measure - remained broadly steady as the NHS made particular efforts to treat long waiting inpatients and day cases (admitted patients). 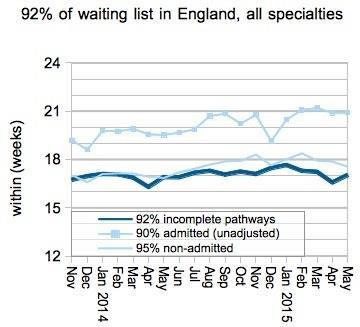 NHS England are getting tougher about trusts that don’t report their data.

It might be a little early to chalk this up as an early success, but both Colchester Hospital University Foundation Trust and Barnet and Chase Farm (now part of Royal Free London FT) have started reporting their waiting list data again, and no further trusts stopped reporting. 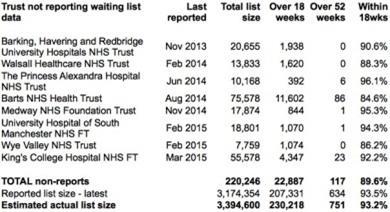 Whether you include the non-reporting trusts or not, the English waiting list is the biggest since January 2008 when there were 3,510,414 patients waiting and the list was shrinking very rapidly towards achieving 18 weeks for the first time.

The following chart does not include non-reporting trusts. 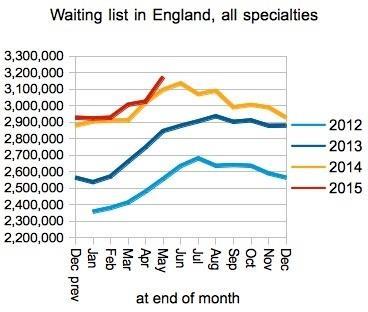 Admissions per working day ticked up in May, but that didn’t quite make up for the shortfall in April. 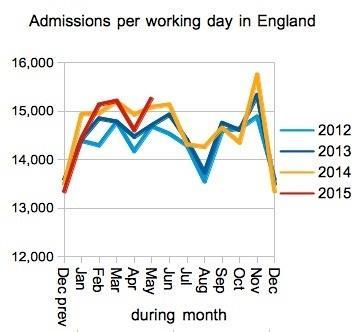 Just before they went on their “reporting break”, Barnet and Chase Farm reported having 182 one year waiters (in September 2013).

But with so many other trusts still not reporting, it is difficult to know whether 700-ish is anything like the true number of one year waiters, or whether it might even be as high as 2,000. 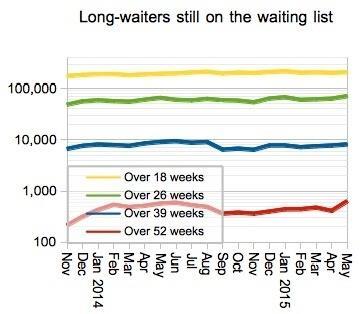 It is curious how England’s waiting list has grown quite sharply, and yet waiting times have held roughly steady. I think the next chart might explain why.

‘The shorter waiting specialties all got worse in May’

As the pressures between specialties evened out, the aggregate waiting list bunched up and was able to accommodate more patients within the same waiting time.

Is this a good thing?

Well, obviously it is good that the longest waits are coming down. But it is always a pity to see hard won improvements being lost in shorter waiting services.

That is why we normally recommend that hospitals cap their waiting lists when planning capacity against waiting times targets, to avoid losing ground on services with short waiting times. 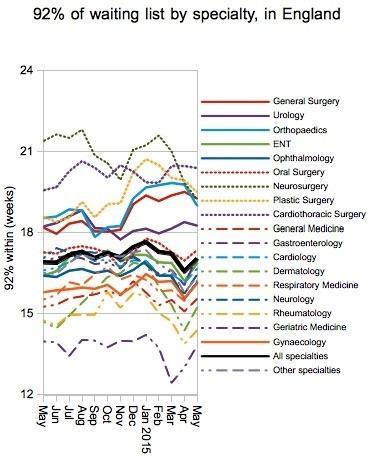 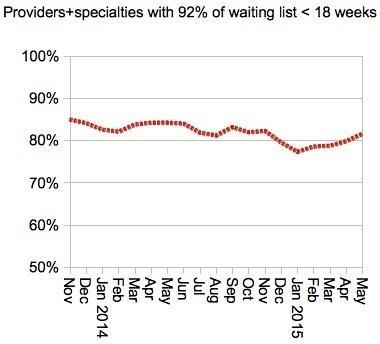 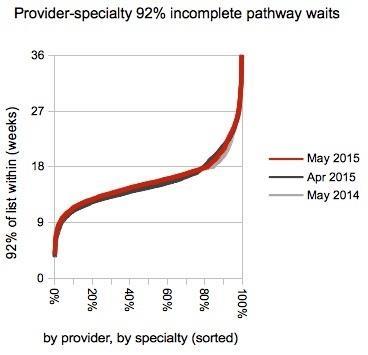 The perverse admitted and non-admitted targets are being abolished, and from October the adjusted admitted data used in the next chart will stop being collected. But let’s just enjoy this chart while it lasts.

When the June figures come out next month, we might even see perverse waiting list management finally coming to an abrupt end after the perverse targets were finally abolished on 4 June.

Kettering General Hospital FT has moved up the table by five places as its waiting times lengthened from 22.2 to 24.1 weeks, while the Robert Jones and Agnes Hunt Orthopaedic Hospital FT and Tameside Hospital FT both improved by nine places apiece.

The reason Royal Free have suddenly appeared in the “top 20” is that they have managed to start reporting data for their Barnet and Chase Farm site - it is a good thing, even if it makes them look bad on the reported figures.

Four trusts dropped out of the table completely in May, but none of them achieved waiting times below 18 weeks - a sign of how long waiting times have become at this end of the scale.

Data for June 2015 - the first month after the perverse “adjusted admitted” and “non-admitted” targets were dropped - is due out on 13 August.