NHS funding and politics: the public’s trust is not for sale

The desire to protect what the NHS stands for drives public thinking and so the main parties are pledging extra money in an attempt to secure the public’s trust. But will it work ask Louise Park and Stephanie Crowe

The issue of how to fund the NHS of the future has been a focus of debate between the main party leaders, drawing media and public attention as election day approaches.

This has prompted both the Conservatives and Liberal Democrats to pledge the £8bn a year in extra funding advocated by NHS England chief executive Simon Stevens.

Labour, pledging an extra £2.5bn a year, claims to be the only party with a “costed, fully funded proposal” for the NHS. But how have these different approaches resonated with the public?

Recent Ipsos MORI research suggests that when it comes to the NHS, there is more to winning over the public than simply promising the most cash.

It’s clear that the NHS is playing a major role in this election. Almost half (47 per cent) of the public say this is very important to them in deciding which party to vote for – ahead of the economy, education and immigration.

And we also know that funding and resources are key concerns: nine in 10 people (88 per cent) think the NHS will face a severe funding problem in the future, and a lack of resources and investment tops their list of the challenges it faces.

‘Seemingly, spending was one way of securing the public’s trust’

We might consider public trust in a party’s ability to handle the NHS to be inextricably linked to its funding strategy.

Late last year the public viewed Labour as the party with the best policies on healthcare; 39 per cent thought this, giving Labour an 18 percentage point lead on the Conservatives.

And in January almost half (48 per cent) believed Labour would increase spending on the NHS if elected in May, while only 28 per cent believed the Conservatives would do this. Spending, it seemed, was one way of securing the public’s trust in a safe pair of hands for their beloved NHS.

Three months on, Labour is promising the smallest increase in NHS spending compared to the Conservatives and Liberal Democrats. However, Labour continues to be the party most trusted to govern the NHS. In April 36 per cent considered Labour to have the best healthcare policies.

This represents a small decline in Labour’s lead, from 18 percentage points to 13, but the proportion favouring the Conservatives’ policies on healthcare has increased by only two percentage points. Funding pledges have not paid dividends for those promising the most money. 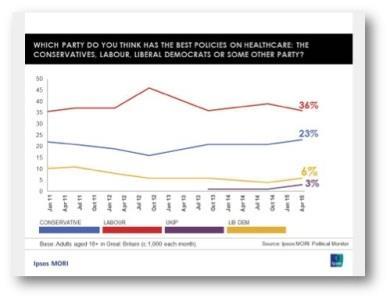 So it would seem that concern about the NHS, and perceptions of the major parties’ ability to take care of it, goes beyond the money issue; the public’s trust isn’t for sale.

We know that the public are unlikely to believe in politicians’ promises; only 16 per cent say they trust “politicians in general” to tell the truth. However, where the NHS is concerned, there are bigger concerns.

There is increasing anxiety among the public about the quality and scope of the services the NHS provides. Around one in 10 people (11 per cent) believe that standards of care in the NHS have improved in the last six months, while a third (32 per cent) say standards have fallen.

Furthermore, Britons are less optimistic about the future when compared with people elsewhere in the world. Two in five (43 per cent) think that the quality of healthcare they will have access to in the future will get worse.

Of the 20 countries surveyed, only Germany, Spain and Italy were less positive about the future of their country’s health services.

Mixed in with concerns about funding and future quality is a fear that principles core to the NHS are under threat.

The NHS is the subject of great pride among Britons, with three-quarters (75 per cent) agreeing that it is “one of the best healthcare services in the world”. 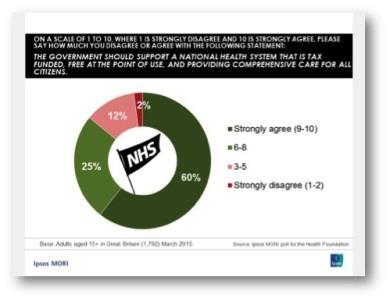 Much support remains for the values on which the NHS was built, and the vast majority of people (85 per cent) feel that the government should support an NHS that is tax funded, free at the point of use, and provides comprehensive care for all citizens.

But, when asked to consider the future, just 63 per cent of the public think that the NHS will still be free at the point of use, and only 61 per cent think it will still provide comprehensive care for all citizens in five years’ time.

It is this desire to protect what the NHS stands for, as well as the high quality services it provides, that drives public thinking. Besides the funding challenge, the values the NHS was founded on are seen to be at risk.

Perhaps the continued belief in the Labour Party as best placed to lead it stems from Labour’s long standing association with these values.

Whatever the amount of funding assigned to the NHS, what really matters to the public is how this money is put to use in maintaining the service and institution they know and cherish.

Louise Park is head of public health and Stephanie Crowe is research executive, both at Ipsos MORI