Not as it seems: Productivity growth isn't always a good thing

As the latest Centre for Health Economics report shows, the NHS has delivered positive productivity growth of 10.4 per cent over the nine years from 2004-05 to 2012-13.

It also reveals that the NHS achieved a third consecutive period of year on year productivity growth between 2011-12 and 2012-13 (the latest year for which national data is available).

That sounds like a good reason to crack open the champagne, but there are some sobering facts behind the figures.

First, recent productivity growth is mainly the result of a low rate of input growth.

The low rates of input growth have been achieved by restraining growth in labour inputs, which account for around half of total inputs.

Reductions in NHS staffing input between 2011-12 and 2012-13 were more than offset by increases in the use of intermediate inputs (such as supplies and services, establishment, and external purchasing), capital and agency staff. This led to positive total input growth.

Further reductions in NHS staffing input are unlikely, as staffing levels have increased following the November 2013 recommendations of the Francis inquiry.

The Health Foundation captures this in its recent study, Hospital Finances and Productivity: In a Critical Condition?, which suggests that hospital productivity fell by 1 per cent between 2012-13 and 2013-14.

Given that hospitals account for about half of the NHS, their poor productivity performance will pull down the figures for the NHS as a whole when these become available. 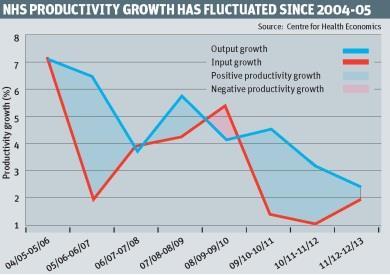 This low growth reflects a recent slowdown in activity growth, and deteriorations in quality, with slight reductions in survival rates for non-elective patients and further increases in waiting times.

The NHS may not quickly return to higher rates of output growth: although quality is not considered in its analysis of hospital productivity, the Health Foundation reports lower annual increases in accident and emergency visits, outpatient attendances and inpatient admissions in 2013-14 than for previous years. 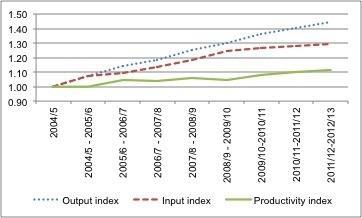 Third, although year on year productivity growth has averaged 1.26 per cent since 2004-05, this is a long way short of the 2-3 per cent required in the forward view to help close a funding gap that is otherwise projected to widened to £30bn by 2021.

With population growth of 0.6 per cent a year and people living longer with multiple chronic conditions, pressures on the NHS are not going to ease.

The health service also has to cope with reductions in social care funding – around 320,000 fewer people received local authority supported social care in 2012-13 than in 2005-06, despite the number in need increasing.

It will not be possible to meet these demand pressures without extra financial support. All political parties have recognised this but extra funding will be conditional on the NHS delivering further productivity gains.

An approach that focuses exclusively on short term adjustment to labour inputs, whether through permanent or agency staff, will not generate long term performance improvements.

Instead, the more strategic vision set out in the forward view is required - involving changes to the existing configuration of services, improvements to urgent and emergency care, and greater emphasis on prevention and public health.