The NHS mandate: liberation or ligature?

The freedom promised by the NHS mandate sounds good in theory but how much liberty is really on offer, asks Ruth Thorlby 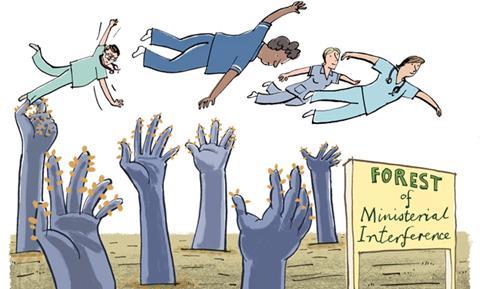 There has been feverish activity at the Department of Health in recent weeks to finalise a document that could have profound implications for the direction of the NHS in England.

The NHS mandate may not hog the headlines, but it sets out what is expected in return for the tax-funded budget from 2013 to 2015. Ministers are keen to present it as a pioneering document, which takes the NHS into a brave new world and brings the reforms a step closer to reality.

The novelty lies in the trade-off at the heart of the reforms: in exchange for promising to meet a range of objectives, the NHS Commissioning Board should be free to decide how it does this, putting an end to ad hoc initiatives, announcements and interferences.

‘If political pressure on the NHS Commissioning Board is intense, particularly in the run-up to an election, the grip may well tighten’

This should mean no more ministerially driven initiatives to extend choice or cut waiting times or tackle neglected conditions or reduce hospital infections or rectify failures in the quality of nursing and so on.

Instead, the plan is to give the NHS some high-level objectives: reduce premature mortality, improve care for the chronically ill, drive up patients’ experience of care, and then let the NHS decide how to do this. This implies no more arbitrary waiting time targets or centrally driven instructions to commissioners about when and where they should procure independent sector providers.

But not interfering is not going to be easy for the government. Just how difficult it will be is already evident in the content of the mandate itself. Listed alongside the objectives for reducing premature mortality and improving chronic care is a very specific objective: improving the care of dementia. Why dementia? Why not depression? Why not diabetes?

Of course, there are very powerful arguments for prioritising dementia: it is under-diagnosed and places huge pressures on families, hospitals and social services. And it attracts only a fraction of the research funding compared with cancer or heart disease.

As people live longer (not least because the NHS is getting better at helping people survive cancers and heart disease) the impact of dementia will increase over time. But it is not evenly distributed.

Dementia prevalence rates vary by area: urban, deprived areas with younger populations will have much lower rates than a rural area with an older population. The original logic of the reforms – especially the move to involve local GPs in commissioning – was to enable local NHS bodies to prioritise spending on the things that matter locally.

‘Why the specific focus on dementia from the centre? The answer is it offers the prospect of some demonstrable achievements within the lifespan of the coalition’

But why the specific focus on dementia from the centre? The answer is that politicians are interested in it (both David Cameron and Jeremy Hunt). It offers the prospect of some demonstrable achievements within the remaining lifespan of the coalition government (the problem with gains in life expectancy or reductions in mortality rates is that they happen slowly and it’s never entirely clear what the contribution of the NHS has been).

From a public perspective, there is nothing wrong with this sort of ministerial energy (and dementia care needs some energy). Except in this case, the whole reform was predicated on a future for the NHS without it.

Even if ministers can now overcome the temptation to meddle from now on, “liberation” depends on more than this. The big unknown is how the commissioning board itself will interact with its constituent commissioning groups. In its own response to the draft mandate, the board was at pains to emphasise the importance of “assumed liberty” for local commissioners: “we will not be their superiors”.

But if political pressure on the commissioning board is intense, particularly in the run-up to an election, the grip may well tighten.

In any case, many fledgling commissioning groups are not feeling particularly liberated at the moment, as they plough through an eye-wateringly bureaucratic authorisation process.

The public are likely to feel ambiguous about this element of the NHS reforms. The authorisation process needs to be thorough, because millions of pounds of public funds are at stake in each area. So, the NHS mandate is indeed pioneering, a bold attempt to solve a uniquely British accountability problem with the NHS.

But a fully liberated NHS, where ministers cannot directly account for behaviour of commissioners as well as the performance of hospitals, might feel very disconcerting.

Ruth Thorlby is a senior fellow in health policy at the Nuffield Trust.