Commissioners in the South West says it could breach procurement regulations to help an acute trust receive more central funding through a change in the way its A&E performance is reported. 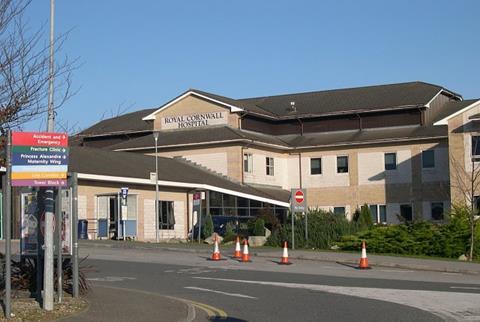 This will boost the trust’s chances of meeting its submitted trajectory against the four hour waiting standard, potentially resulting in extra money being awarded from the sustainability and transformation fund.

If the CCG approves the request, submitted by both trusts, it would be breaching the Public Contracts Regulations 2015 because it would constitute a direct award of a contract, its board papers said.

Royal Cornwall would subcontract the MIU service back to Cornwall Partnership with the intention that existing management arrangements would not change.

The CCG says there would be no impact on the service provided to patients.

The service is estimated to be worth £6.3m, according to the board papers.

The CCG finance committee recommends that the governing body approve the request, with extra conditions attached, at its meeting today.

Royal Cornwall has struggled with its A&E performance for several years and in April it achieved 81.7 per cent against the 95 per cent four hour waiting time target.

This figure relates to the A&E at Treliske Hospital in Truro and an MIU at West Cornwall Hospital in Penzance.

By combining the reporting of those sites with the other MIUs the trust would “significantly strengthen the ability to meet the submitted STF trajectory for performance… and therefore achievement of the associated financial incentive”, the CCG board papers said.

The trust has added the income earned from achieving its STF trajectory in its financial plan for 2017-18, and failure to deliver this would create “budget pressure” of £2.5m.

The board papers said integrating the performance would “effectively guarantee” STF delivery in the first two quarters of 2017-18 and “provide every opportunity that quarters three and four were also achieved”.

“The performance uplift would just be statistical and there would be no real change or improvement to the service offered to the public as a result of this change,” they added.

However, the CCG has acknowledged it would breach procurement regulations by approving the request.

The papers said: “The current regulatory framework does not permit this change and legal advice is clear, it would contravene procurement regulations, although the risk is considered to be low.

“Challenge against a direct award to [Royal Cornwall] is unlikely to come from other providers.”

The trust has also been awarded £1m of capital funding by the government from the spring budget.

The grant followed a bid committing the trust to achieve the 95 per cent target from April 2018. This was submitted without reflecting the potential change in MIU provision.

The CCG papers also say both NHS England and NHS Improvement have “indicated their support for this early in the discussions”.

By publishing its report, the CCG hopes it has “minimised any risk that this might be perceived as an attempt to misrepresent improved performance”.

The MIU service is part of the adult community services contract awarded to the Cornwall Partnership, Royal Cornwall and Kernow CIC in 2015.

Neither Cornwall Partnership nor the CCG wanted to comment ahead of today’s meeting.

A spokesman for Royal Cornwall said the trust was not asking the CCG to breach regulations.

He said: “This is wrong as we were part of the original bid. This move is simply a contractual change and continuing our approach to integrate services in a way that improves care and performance for patients.”

CCG board papers and information provided to HSJ