More patients may have been admitted to hospital with flu this winter after NHS England asked GPs to order a less expensive flu vaccine, a senior doctor has warned. 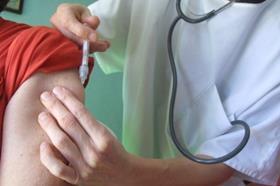 Research found quadrivalent may be more effective for adults under 65

Public Health England has since said quadrivalent may be more effective for adults as it protects against what has emerged as the most prevalent strain of influenza B this winter, called B-Yamagata, whereas the trivalent vaccine only protects against the B-Victoria strain.

Earlier this month, PHE warned GPs in the South West that influenza B was the predominant strain and said patients vaccinated with the trivalent medicine could still be at risk.

The World Health Organisation has said that the B-Yamagata strain made up 86 per cent of the B strain cases in 105 countries in December 2017.

Nick Scriven, president of the Society of Acute Medicine, told HSJ: “Not using the quadrivalent vaccine has increased the risk of flu admissions [this year]. Half of the flu cases we are getting are the A strain, half are the B. It’s probably about half the cases that are coming into hospital that may have been prevented.”

NHS England said it had not sent out any national advice to GPs over which vaccine to buy. However, governing body papers, published in October by West Kent CCG, show NHS England South had emphasised the “cost effectiveness” of the vaccines in correspondence to GPs.

The papers said The Green Book, which contains the latest information on vaccines and vaccination procedures from PHE, advised at the time: “The quadrivalent vaccine is ‘preferable’ all things being equal, but it is not mandated for the adult programme.

They continued: “The advice from the national team is that there is minimal evidence of cost effectiveness. In the absence of robust evidence to prove superiority, the local CCGs and NHS England South (South East) are advising that prescribers should select the product with the lowest purchase price to the NHS and not purchase the quadrivalent vaccine for adults.”

PHE guidance published last month said the quadrivalent vaccine was “likely to be cost effective compared with the trivalent vaccine”. If the predominant strain of flu is B-Yamagata, PHE said that healthcare staff would “derive some benefit” over the cheaper vaccine.

HSJ has seen evidence from three NHS trust boards that shows they opted to buy quadrivalent vaccines for staff to “offer more protection” before winter.

The Green Book was updated in December to say there were “relatively small health benefits” from using the quadrivalent vaccine in older people “but that the benefit is more substantial in at risk adults under 65 years of age, including pregnant women”.