NHS England has appointed another leading provider chief executive to a national role – to lead the transformation of maternity services. 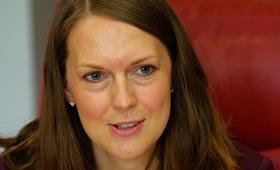 Sarah-Jane Marsh will chair the maternity transformation programme board

It follows the publication in February of a national maternity review, led by Baroness Cumberlege. Ms Marsh’s job will be to lead the implementation of the review, which aims to cut the rate of stillbirths and neonatal and maternal deaths.

All the appointments are secondments. Ms Marsh will retain her responsibilities leading the two Birmingham trusts.

Birmingham Children’s Hospital was provider trust of the year at the HSJ Awards 2015, and this year Ms Marsh was named as one of HSJ’s Top Chief Executives.

Ms Marsh said: “As a passionate advocate for women’s and children’s services, I am thrilled to be chairing the maternity transformation programme board…

“Pregnancy, birth and getting to know and love your baby should be the most precious and joyous time of a woman’s life. The maternity transformation programme is committed to ensuring that those working across maternity services have the right environment, tools and resources to continually improve care for woman and babies.”