HSJ analysis has given the most detailed picture so far of the make-up of clinical senates, revealing the extent of large acute trusts’ influence over the advisory bodies. 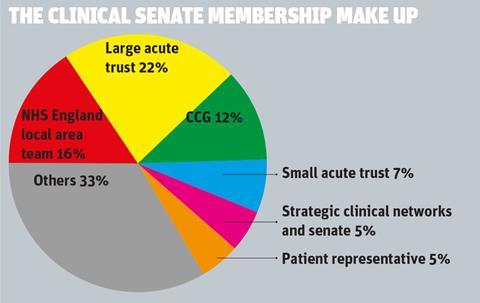 Large acute providers with turnovers of more than £300m account for 22 per cent of all membership of the 12 clinical senates, compared to their smaller acute counterparts, which make up 7 per cent, and mental health trusts, which make up less than 4 per cent.

NHS local area teams have the second strongest presence overall, constituting nearly 16 per cent of all membership. Clinical commissioning groups account for under 12 per cent of members, while local government makes up over 4 per cent.

Other organisations represented on a number of the senates include Public Health England, Health Education England, universities and academic health science networks. The police are represented on one senate.

The clinical senate concept was introduced at the NHS Future Forum – which was set up in response to the opposition to the Health and Social Care Bill – in June 2011. They were designed to represent “doctors, nurses and other professionals” who would produce “expert advice… which we expect CCGs to follow on how to make patient care fit together seamlessly in each area of the country”.

However, there is considerable disparity in how far they have advanced since their creation. No members have yet been appointed to Yorkshire and the Humber Clinical Senate. Two other clinical senates, Cheshire and Merseyside, and Greater Manchester, have only appointed a chair and interim chair respectively.

The senates also vary considerably in size: West Midlands has 38 members; Thames Valley has just 13. While some are still recruiting members, others have begun reviewing services. West Midlands is reviewing urgent care and Wessex last year reviewed specialised vascular services in Hampshire, recommending the centralisation of surgery in Southampton. This prompted concern about the potential for vested interests.

Should Wessex Area Team decide to implement its senate’s recommendations, Portsmouth Hospitals Trust would lose some services. Peter Mellor, the trust’s director of corporate affairs and business development, pointed out in December that Portsmouth was not represented on the senate.

Adrian Bull, managing director of Imperial College Health Partners and a member of London Clinical Senate, said: “Clinical senates inevitability have to be made up of clinicians.

“There is no getting away from the fact that clinicians are always going to be employed by some organisation.”

He added: “Any member with a vested interest in an organisation under consideration should declare that interest and take no part in the discussion.”

David Levy, NHS England’s national lead for clinical senates, said most had established their own conflict of interest polices. During a review of acute services in Worcester last year, West Midlands brought in the chair of neighbouring East Midlands to write the final report.

Dr Levy said senates were still in the early stages, but were increasingly able to look at “difficult areas” such as a “thorny issue of reconfiguration”.