Raising awareness of breast cancer among over 70s

A pilot by NHS Brent and Harrow to promote earlier detection of breast cancer in women over 70 yielded exceptional results, as Sam Ingram and colleagues report

Each year more than 39,000 women in England are diagnosed with breast cancer, and of these, 33 per cent are aged over 70.

In 2011-12, NHS Brent and Harrow carried out a pilot project to promote earlier presentation of breast cancer in women aged over 70 as part of the Be Clear on Cancer campaign.

This pilot substantially increased levels of awareness of the signs and symptoms of breast cancer, making local women almost twice as likely to contact their GP within a day of noticing changes in their breasts, and quadrupling the number of self-referrals by local women aged over 70 to their local breast screening service.

To fund the project, NHS Brent and Harrow successfully bid for and was awarded funding by the Department of Health as part of the national awareness and early diagnosis initiative (NAEDI)’s Be Clear on Cancer campaign. The resources developed by the DH for this and six other similar local pilots were used throughout the project.

An early presentation project manager was recruited to run the pilot at Brent and Harrow in November 2011. A steering group was established, with representatives from public health, health improvement, the North West London Cancer Network, Brent Age UK and a patient representative.

In addition, a network of support made up of local and national public, voluntary and community sector organisations (including Cancer Research UK and the National Cancer Action Team, partner organisations of the NAEDI) was developed.

Writing to women over 70 was the pilot’s first intervention. The NHS currently stops routinely writing to women to invite them for screening at age 70, to be increased to 73 nationally by 2016.

‘Sessions focused on the risk factors associated with breast cancer, signs and symptoms, and the importance of seeking early advice’

When local GP surgeries were asked via commissioning groups and practice managers to take part, 39 GP practices in Brent agreed. This enabled 7,500 Brent-registered women to receive letters, though some of these women may actually have lived across the border in Harrow. 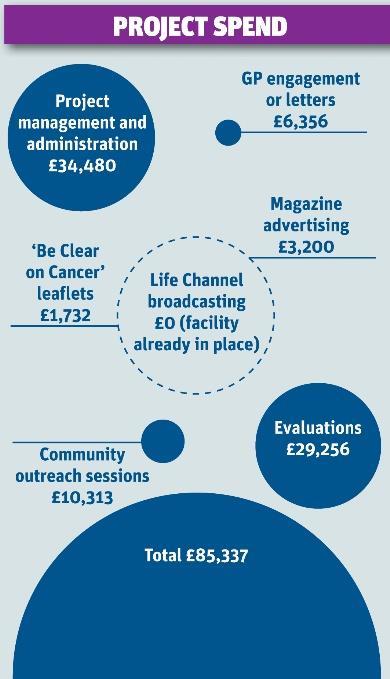 These letters were addressed to each recipient personally. They emphasised the importance of seeking help from GPs and screening services, gave contact details for the local screening service, and included a Be Clear on Cancer leaflet about breast cancer signs and symptoms aimed at women over 70.

The letters also included details on how to access the information in four other languages widely spoken in Brent − Gujurati, Hindi, Punjabi and Urdu − via specially commissioned language lines.

In addition to the leaflets sent with the GP letters, 15,000 leaflets were displayed in GP waiting areas and 1,200 were mailed out with the Brent Carers magazine.

The project team recognised that a triangulated approach might be needed to provide information for women who may not respond to standardised written information such as letters and leaflets, or who may prefer information in languages other than English.

As a second intervention, 48 breast cancer awareness community outreach sessions were delivered to over 955 people in Brent and Harrow in venues including residential homes, health centres, places of worship and community centres.

While most of the sessions were delivered exclusively in English, 12 were also delivered in other languages. The content of these sessions focused on the risk factors associated with breast cancer, the signs and symptoms, the importance of seeking early medical advice and how to contact the local screening service.

The third intervention was to use local media to promote the project’s key messages. Adverts were run in Harrow People and Brent Magazine, on local radio stations and on the Life Channel in Brent (a television service shown in local health venues).

To evaluate the project’s interventions, ICM Research carried out 819 face-to-face interviews with a representative sample of the target population − local women over 70 − using quotas by age, ethnicity and socio-economic status.

‘Findings were overwhelmingly positive, with women reporting increased awareness of the signs and symptoms of breast cancer’

Of these interviews, 619 were with women in Brent, which was the main hub of the pilot’s activities, and 200 were with women in Harrow. The interview schedule included validated questions taken from Cancer Research UK’s cancer awareness measure. Where relevant, comparisons were made with pre-intervention research conducted by NHS Brent and Harrow directly before the project started.

We found that 49 per cent of the women surveyed in Brent and 34 per cent of those in Harrow had seen, heard or read about the campaign. The most commonly perceived main messages of the campaign were to raise awareness of the signs and symptoms of breast cancer, to encourage people to see their doctor if they have symptoms and to encourage people to take up the offer of a screening programme.

Of the women surveyed, 13 per cent recalled receiving the GP letter. These women reported increased awareness of signs and symptoms of the disease, fewer barriers to early presentation and increased likelihood of presenting early with symptoms.

The outreach sessions were evaluated using a variety of qualitative methods, including interviews, observations and questionnaires. These were designed to be responsive to the needs of the women participating and to address space and time constraints.

The findings were overwhelmingly positive, with women participating in the sessions reporting increased awareness of the signs and symptoms of breast cancer, and new or consolidated intentions to access GP or screening services.

With a total spend of around £85,000 over the project’s lifetime of  seven months, 7,500 older women receiving personalised letters from their GPs, 955 people participating in 48 outreach sessions within their communities, over 16,200 leaflets distributed among local patients and carers, and adverts in local media, the pilot achieved its aim.

While sending GP letters was very effective, it is likely that the triangulated approach combining a number of interventions substantially increased breast cancer awareness levels and self-referrals to screening services among the target population. 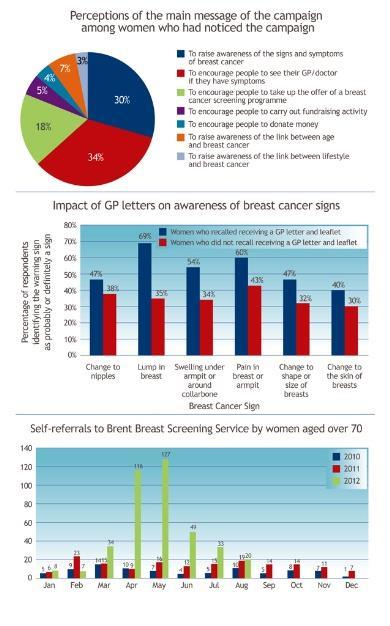 Breast cancer screening service uptake statistics for Brent were analysed to gauge the pilot’s impact. These showed substantial increases in self-referrals by over 70s in the months immediately following the pilot’s interventions:

Figures also show, though, that the increase in referrals was not significant by August 2012. While data for after that month are not yet available, this may suggest it is necessary to sustain the project’s interventions to maintain higher levels of self-referral. This view was also expressed in an online survey of 24 GP practice managers that participated in the pilot.

The pilot has been shown to have made a positive impact. Of the women surveyed in our report, 71 per cent who received a GP letter said they would see their doctor on the same day if they notice any changes in their breasts, compared with 43 per cent of those surveyed before the pilot.

Following this pilot, alongside others, the DH is now progressing to regional pilot. This campaign includes television adverts and personalised letters, and Cancer Research UK will be coordinating its evaluation, working with the NHS cancer screening programme to evaluate its impact on self-referrals for breast screening among women over 70.