All seven NHS England regions are now struggling under covid inpatient demand not seen since the peak of the pandemic in April.

At the same time, deaths of covid positive hospital patients have started to rise once more.

The number of covid positive inpatients in English hospitals rose 2,256 to 16,183 over the seven days to 19 December. The 16.2 per cent increase compares to one of 7.4 per cent in the previous seven-day period, underlining the accelerating nature of the pandemic.

The number of inpatients has now been increasing for a fortnight at an average rate of 229 a day. If that rate is maintained, the English NHS will end 2020 with approximately the same number of covid positive inpatients as at the peak of the pandemic on 12 April.

The largest rise in covid inpatients came in London, up 817 (39 per cent) to 2,909 on the 12 December figure. The capital last recorded a similar number on 28 April.

Inpatient numbers in the eastern region jumped 536 (38 per cent) to 1,943. This is the highest ever total recorded in the region, far outstripping the first wave peak of 1,679 seen on 12 April.

The Midlands remains the region with the highest number of covid positive inpatients. The number rose 7 per cent to a level equivalent to that on 14 April. Inpatient numbers in the North East and Yorkshire region rose 4.5 per cent to 2,413. The region reported a similar number on 9 April.

The remaining region, the north west, has seen inpatient numbers remain flat for a fortnight. Its 2,253 inpatients is very similar to the number recorded on 28 April in the region.

Covid admissions are rising in all regions, apart from the north west.

Deaths of covid positive inpatients peaked during the second wave at rolling seven-day total of 2,209 on 24 November. The figure then fell to 1,937 by 11 December. However, since then the number of deaths has begun to creep back up. It stood at 2,009 on 15 December, a number likely to rise once all relevant fatalities are recorded.

Deaths of covid positive inpatients are rising in London, South East, South West and Eastern regions. They are relatively unchanged in the Midlands and continuing to fall in the North East and Yorkshire and North West..

Deaths more than doubled in the Mid and South Essex STP area (26 to 53) and Devon STPs areas (19 to 41) over the seven day period to 15 December. Thirty-one of the MSE deaths were recorded at Southend University Hospital.

The five STP areas with the largest number of deaths during that period were Kent and Medway (134), Cumbria and North East (119), East London (117), Greater Manchester (115) and Lancashire and South Cumbria (96). 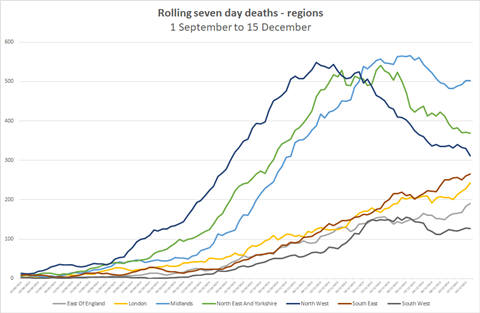 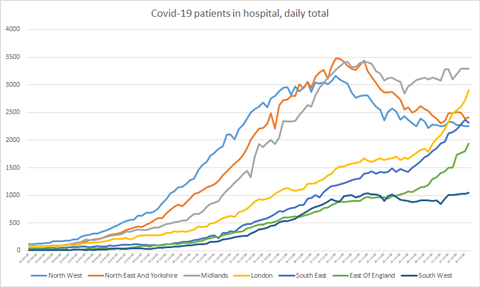