Coronavirus spread appears to be persisting at a higher rate in parts of the north of England – prompting warnings that the mortality gap between those more and less deprived will get bigger.

Figures seen by HSJ indicate the covid-19 hospital admission rate in the North West is falling far more slowly than elsewhere, and has been higher than all other NHS regions for nearly three weeks.

The number of new daily cases in North West hospitals (the total of patients who are admitted with confirmed covid-19, and patients testing positive for covid once in hospital) has been around 175 since the beginning of May, and the rate per 100,000 people just below 20.

Hospital admissions peaked only a few days later in the North West than in London, but its rolling-average rate of admissions has now been running higher than London’s since 21 April, and has been diverging while other regions fall faster. 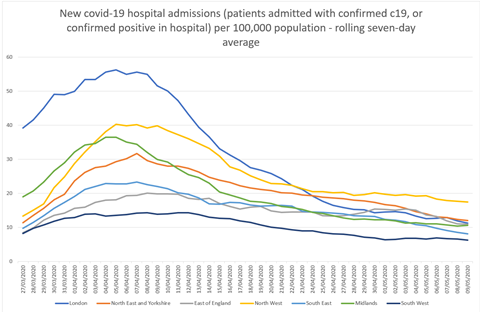 The deputy chief medical officer last week highlighted new covid-19 hospital cases as a good measure of spread because it is largely unaffected by the big expansion in covid-19 testing for some groups over the past month (which is pushing up the number of confirmed cases overall). She highlighted the national reduction but not regional disparities.

The figures used, from daily covid-19 trust reporting, are not “validated” for data quality, but are used to compile the government’s national press conference reports.

On hospital admissions accounting for population size, the next highest region after the North West is Yorkshire and the North East — but it is more closely grouped with the other regions.

On infection rates, last week, several areas in the North West - Wigan, Salford, Bury and Blackpool - saw the greatest growth; and several parts of the North East have the highest cumulative infection rates.

Infection rate measures are skewed by testing developments — but the largest number of hospital deaths from covid-19 are now taking place across the North West, North East, and Yorkshire.

The most recent ONS figures, which look at all deaths in recent weeks, show the largest “excess” per population — the rate of deaths compared to what is usual — are also in these areas — specifically Middlesbrough, Hartlepool, Gateshead and Blackburn with Darwen. In the later weeks of the outbreak, most areas have seen their excess deaths figures fall, but it has left more deprived areas (in red) making up more of the hardest-hit areas.

It comes as political leaders in the north of England, including Greater Manchester Mayor Andy Burnham, have said they are concerned about the loosening of national lockdown measures and messaging.

Senior figures in the NHS and local government said they believed that as the infection continues to spread it is likely the “deprivation gradient” for covid-19 deaths — the gap in the mortality impact linked to deprivation — will become more steep, not reduce.

Despite the government saying it is concerned at the link so far between covid-19 deaths and deprivation, the gap is so far less severe than for some common health conditions like cardiovascular disease.

The leaders of West Yorkshire and Harrogate integrated care system have shifted the entire focus of its population health teams onto trying to deal with the likely inequality impact, on groups judged to be vulnerable and excluded.

Robin Tuddenham, chief executive of Calderdale Council, who is leading the work, said: “As we move into the next phase of this pandemic, it is becoming clear that the inequality gradient is at risk of getting steeper and starker.

“Government’s new localised alert system tacitly accepts that covid-19 is a pattern of local outbreaks. We all have a part to play to mitigate the impact on the poorest, and those in our northern towns already living with multiple disadvantage.”

Health and local government leaders in those regions told HSJ they were concerned the apparently high figures in recent weeks may be linked to:

One public health director in the North West said: “I am very concerned about loosening of measures [on the back of data for the North West] which doesn’t really seem to be showing the same signs of decay and reduction that other regions are seeing.

“There is a real need to understand the data better, that includes hotspots of activity, results from testing activity, and why outcomes appear to be worse in certain areas. Working hypothesis is due to higher levels of deprivation, significant financial challenges and funding gaps.”

There are more areas in the north of England with larger proportions of the population who are frail — a general measure of poorer health which is likely to make them vulnerable to covid-19 directly and the knock-on health effects (see map below). Frailty affects many more older people, but not uniquely.

Martin Vernon, a consultant geriatrician working in Tameside and Glossop, in Greater Manchester, and a national clinical director from 2016 to 2019, said: “Frailty can provide a useful lens to identify populations with greater underlying vulnerabilities to acute illness linked to both health and socioeconomic inequalities.

“These are populations where there are likely to be greater issues with social dependency, housing and employment which could have an impact on ability to adhere to social distancing policy. Findings from the GP Patient Survey in England suggest that frailty is particularly prevalent in the North West, suggesting in turn that the region could be more challenged by the current pandemic than elsewhere in the country.” 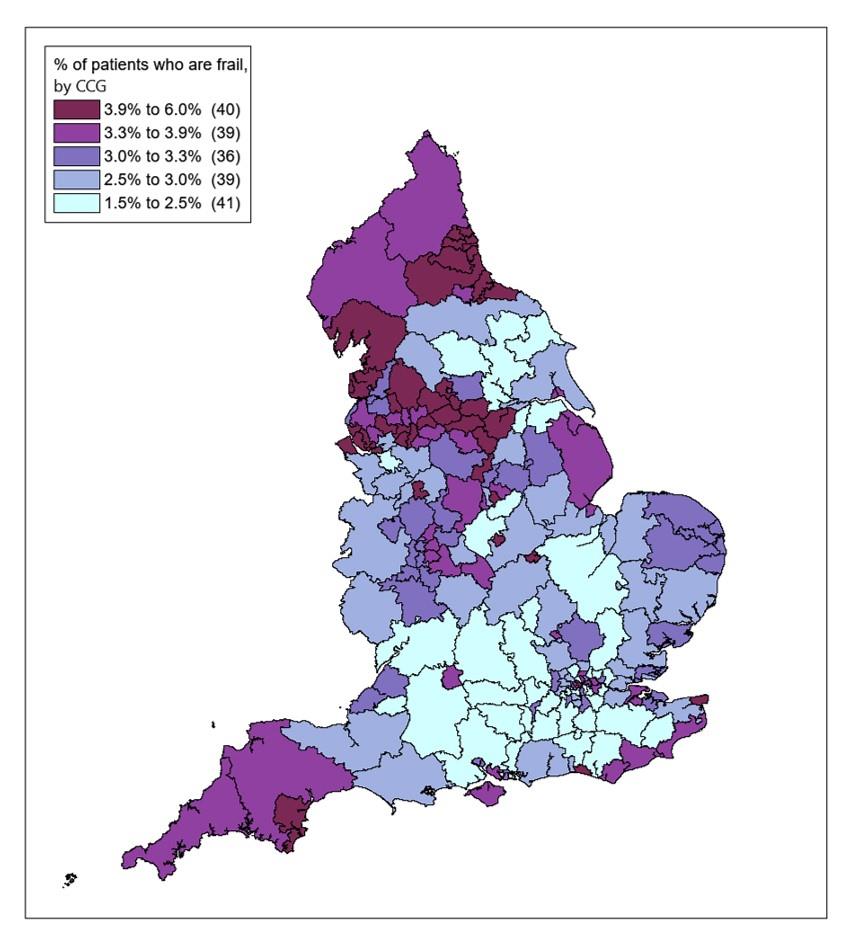 Share of CCG population which is frail, according to GP patient survey