New areas have emerged as hotspots for excess deaths during the coronavirus pandemic, according to new analysis of care home statistics by HSJ.

The sustainability and transformation partnerships covering Hertfordshire and West Essex and Gloucestershire have not so far featured prominently in the hospital death statistics published by NHS England.

But according to data published by the Office for National Statistics this week, these areas saw large spikes in the number of care home deaths from all causes in the middle of April.

In an average week prior to the pandemic, care homes in Hertfordshire and West Essex would report around 57 deaths.

But the figure for the week ending 17 April was 274, implying an excess of around 217 on the typical numbers. This represents 15 deaths per 100,000 population on an age-standardised basis, which was the highest number in England in that week. Covid-19 was recognised as a factor in only 102 deaths, suggesting it is likely to have been underreported, although residents may have died from other causes, perhaps indirectly caused by the covid response.

Gloucestershire had an excess of 94 deaths, which equates to 13 per 100,000, the second highest rate outside of London, whose high levels of hospital deaths from the virus are well reported. 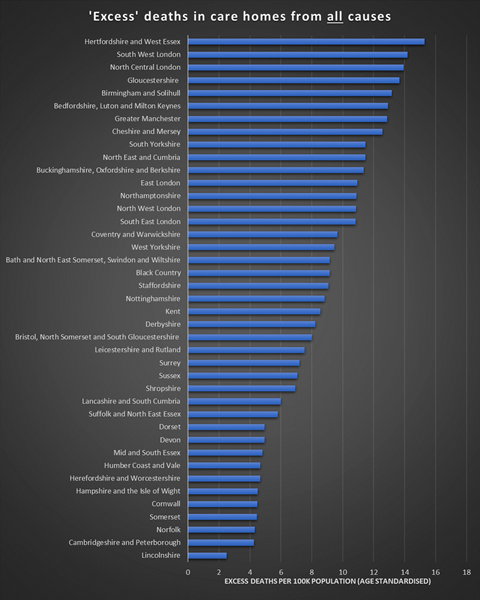 Excess deaths defined as the difference between the number of deaths from all causes in the week to 17 April and the average weekly total in the four weeks to 20 March. STPs are based on district council boundaries which in some cases do not match the exact NHS footprints. Frimley Health has not been included, with its districts instead sitting in their relevant counties.

There has been significant controversy over the amount of support the government and NHS have provided to the care sector. At the start of the outbreak, there were major concerns over patients being discharged from hospitals to care homes without having first being tested for covid-19.

Richard Roberts, Cabinet member for adult care and health, said: “We know that giving certainty and leadership to our care sector is of fundamental importance. Six weeks ago we wrote to our care providers setting out a financial package which is one of the best in the country, with a dedicated helpline, website and daily emails to ensure everyone is up to date.

“We have agreed a comprehensive plan of action with our NHS partners and public health to control and prevent the spread of this virus in our care homes and the wider care community.”

Sarah Scott, director of public health at Gloucestershire County Council, said: “Residential and nursing homes are doing fantastic work, caring for the elderly and vulnerable during these unprecedented times.

“As a health and care system, we are supporting homes to ensure they are taking all necessary steps, in line with the national guidance, to minimise risk to both their staff and residents.”