The NHS in England saw five times more covid positive patients admitted to hospital in the second quarter of the 2021-22 financial year than in the first, analysis of official data by HSJ shows.

The analysis underlines the significant local variation presented by covid pressures, with one region recording an increase of more than eight times its first quarter total.

The national total is also around five times greater than the number of admissions recorded during the second quarter of the 2020-21 financial year.

Although the Q2 total is far below the 200,000 admitted during the three months between November 2020 and January 2021, the significant increase comes at a time when the NHS is preparing for a tough winter while also trying to deal with unprecedented emergency and elective pressures.

While previous waves have peaked faster and reached much higher levels, they have also fallen relatively quickly. Covid admissions have now hovered around 20,000 a month since July (the second quarter includes the eighth, ninth and tenth busiest months of the 18-month pandemic).

The increase over the summer months has been particularly dramatic in the South West region. Between 1 April and 30 June 2021, the region saw just 704 covid positive admissions. In the last three months, the total has increased eight-fold to 5,685.

However, the greatest numerical rise came in the North East and Yorkshire region. Here admissions rose six fold, from 2,312 in Q1 to 13,586 in quarter two.

The latest admissions data (to 2 October), shows a plateauing in the total. The seven-day total stood at 3,994 on 2 October. It has now hovered around 4,000 for 10 consecutive days.

Unsurprisingly, the trends in admissions are impacting on bed occupation levels in trusts.

Yesterday, there were 4,909 covid positive patients in English hospitals. This is 4 per cent down on a week ago, but 6 per cent up on the total recorded on 1 October.

The NHS has now had more than 4,500 covid hospital patients for 75 consecutive days.

Both the South East and South West regions are now in week-on-week growth. Only the North West region is seeing significant falls in covid occupation. 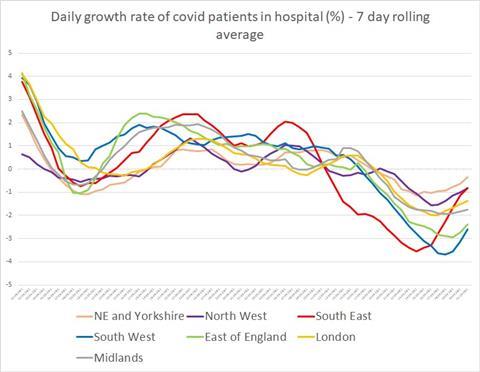 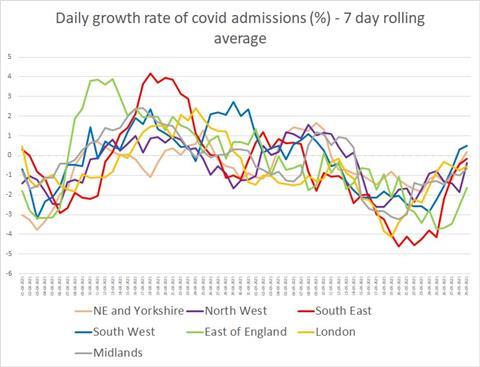 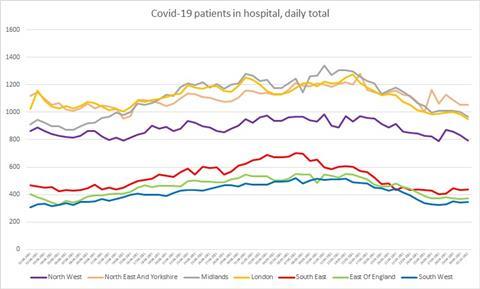 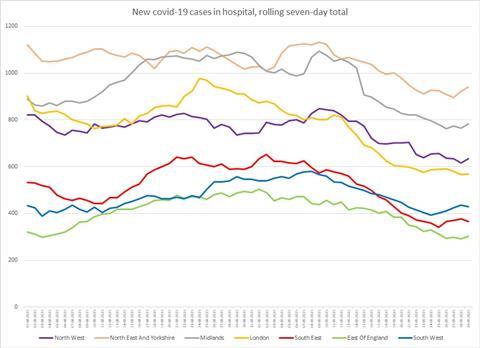