Areas covered by new care model vanguards saw a fall in the GP referral rate during 2016 and 2017, and very slightly lower growth in emergency admission rates than the rest of England, analysis by HSJ indicates.

This story was corrected on 25 January 2018. See full note below.

We looked at activity in 16 clinical commissioning group areas that, according to NHS England information, had a national vanguard site covering the majority of their population.

On emergency admissions, the vanguard CCGs saw a 1.26 per cent increase in the per capita rate. Across all other CCGs there was an increase of 1.53 per cent in the rate.

A number of factors could be behind activity trends, and the vanguard CCGs already had a higher rate. HSJ’s analysis also found a number of non-vanguard areas had seen greater reductions in emergency admissions than vanguard areas.

While emergency admissions are seen as a key litmus test for success of whether new care models can moderate demand and costs; many of them have also focused on developing links between primary and secondary care which could reduce GP referrals, and building outpatient type services away from hospitals.

During this year there has been a call from NHS England for all areas to reduce GP referral rates, as well as a hard line with vanguard areas on reducing their emergency admissions growth rate. 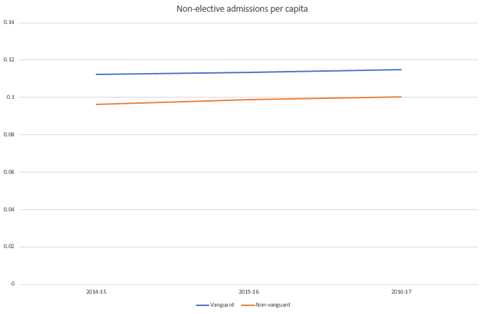 Of the 16 vanguard CCG areas analysed, just thee - Salford, Stockport and Tower Hamlets – saw an absolute reduction year on year in per capita emergency admissions. These CCGs saw a decrease of 10.6, 0.28 and 6.7 per cent respectively.

For the GP referral rate, eight saw a decrease, with Tower Hamlets the largest at 9.9 per cent.

An NHS England spokesman said: “The latest data show vanguards are continuing to deliver substantially slower growth in emergency admissions and emergency bed days per person than the rest of the NHS.

“It’s important to push forward and build on this good progress and ensure learning from the new care models is adopted more widely across the health and care system.”

This story was corrected on 25 January as some errors in the calculations were brought to our attention. The change in individual CCGs’ non-elective admission rates were incorrect, and the overall difference between non-elective growth in the vanguard CCGs we looked at, and in other CCGs, is very small - smaller than we had calculated. The GP referral rate calculations are unaffected, as is the attached analysis piece – ‘Analysis: The areas seeing sustained falls in emergency admissions’. We apologise for the error.