End Game: Farewell to the wee man of the NHS 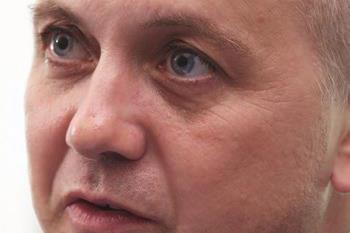 End Game was in attendance at Tim Kelsey’s recent leaving bash, to bid a tearful farewell to the national director for patients and information before his imminent exit from the NHS stage.

Is TeeKay taking up a job at Aussie telecoms giant Telstra, or has he just been subject to transportation? End Game forgets.

As some End Game readers will know, prior to becoming the biggest thing in health technology since the whiteboard, Mr Kelsey had a very distinguished career in journalism, including as a Middle East correspondent.

Mr Stevens spiced up his speech with a few choice quotes from the Amazon reviews of Mr Kelsey’s 1996 book Dervish: The Invention of Modern Turkey (paperback copies still available online from just 1p, plus delivery charge). It’s fair to say the tome split the reviewers.

One anonymous customer gave it five stars, calling it “one of the best books I have read on Turkey” and “a gem” (careful Mr Kelsey, you might breach Amazon’s terms of use with that sort of caper).

Another anonymous customer gave it just one star. “For more than 300 pages he wanders compass-less and uncomprehending through a country for which he has no sympathy,” they said.

But perhaps the most intriguing review came from Eddie J Girdner. As well as challenging Mr Kelsey on his knowledge of Turkish geography (complete with page references to alleged errors), following an apparently forensic analysis of the text, Mr Girdner reaches this bombshell conclusion: “The author has a real talent for smelling ‘urine’ in all kinds of places.”

Goodbye Tim, the NHS will be a duller place without you.

What’s in a name?

End Game squeaked with glee when we were sent an email with “an opportunity to help” in the subject line. Oxford University Hospitals Foundation Trust is trying to think of names for the roads on its four main hospital sites.

There are about 40 roads that need naming

There are about 40 roads that need naming, making us wonder how on earth anyone found their way around previously. Perhaps the well documented local problem with delayed transfers was being caused by baffled cabbies driving around the campus for hours trying to work out where to go to pick up grandma?

Anyway, we’re pleased to see OUH is making the most of its new, hard-won FT status.

There were loads of naming guidelines attached to ward off the wags. Streets may be named after people but “it would be preferable not to do so unless the person whose name has been suggested is in some way related to the particular area or village where the development is taking place…”

How about Stevens Road? He went to Balliol College in Oxford.

“…with the exception of saints or members of a royal family, the surname alone is to be used.”

Excuse us. St Simon’s Road it is, then!

Proposed names “should not be deemed to be offensive, inappropriate and/or misleading”, which rather scuppered End Game’s other suggestions. 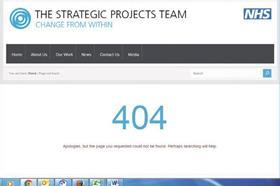 Needless to say, the collapse this month of Cambridgeshire’s landmark, £800m, older people’s care contract, after just eight months, was not the NHS’s finest hour. However, some parties perhaps have more reason to feel sheepish than most: step forward the Strategic Projects Team.

We were greeted with a 404 error message

As well as advising on the Cambridgeshire contract, some of the SPT’s other hits include the Hinchingbrooke/Circle deal and the abandoned procurements to franchise George Eliot Hospital Trust and Weston Area Health Trust.

End Game wanted to have a further look through the SPT’s back catalogue, but when we visited the “our work” page on its website last week we were greeted with a “404” error message.

Was the SPT doing the online equivalent of nonchalantly whistling while strolling very quickly away from the scene? Or had the website collapsed, too?

The SPT’s error message was not the only online boo-boo End Game found recently.

Scrolling through Brighton and Hove Clinical Commissioning Group’s board papers, we found the following sentence – the last in a series of bullet points outlining local CCGs’ plans to avoid hospital admissions:

“Share resource across a wider areas to provide economies of scale and address variations in health outcomes as evidenced by the Commissioning for Value – can we focus on anything specific here?”

It appears the last bit was left in from an earlier draft. As one who often despairs at opaque, jargon filled references in NHS documents, End Game would like to say directly to the author: you took the words right out of our mouths.