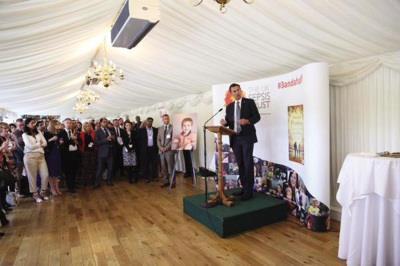 It’s no secret that Jeremy Hunt is a snake hipped, big hearted lambada fan. That’s if his dance teacher is to be believed. He told The Guardian a couple of years ago: “Dance comes from the heart and that’s one thing Jeremy has – a big heart.”

Due to the pressures of overseeing the complex beast that is the NHS, we thought the health secretary’s lambada days were well behind him.

But this photo tweeted last week from the UK Sepsis reception in Parliament suggests not. See how the crowd has kept a wide berth from the health secretary as he prepares himself for a knee slide intro before launching into a 10/10 routine.

End Game likes to consider itself an open minded column and would hate to be accused of prudishness. But even we had to wince a little when Baroness Young revealed details of a lively conversation she had with Andy Burnham to do with a job offer she received when he was still health secretary.

Speaking at a Reform event in London last week, the baroness said: “Don’t get me started on the [Care Quality Commission] as a carrot and stick regulator.

“It was that issue on which I told the secretary of state to take his job and stick it somewhere dark, warm and interesting.”

We can abide the first two adjectives, but “interesting” is not a word we’d usually associate with rear ends. Still, we appreciate the candour of the baroness and feel the need to quickly change the subject as our cheeks (on our face) begin to redden.

Sometimes inarticulacy can communicate something more clearly than plain English. So it proved with one of the internal NHS England London documents End Game was forced to read.

The document concerned whether more work should be done to advance the cause of community services.

‘A straw man poll is a commendably honest description’

The booster-ist document said a survey of interested parties online had found that, yes, more should be done to advance the cause of community services.

The report said the online “straw man poll” had favoured this.

We think the authors meant a “straw poll”, but given the loaded nature of the question, a “straw man poll” is a commendably honest description.

Sweets not for lunch

End Game values lunch a great deal. As busy as the working day can get, lunch is a constant even if it means stuffing a sandwich into our faces while desperately hoping the person on the other end of the phone carries on speaking long enough for us to finish it.

So we’re glad that Virgin Care has started the “Love your lunch” campaign, designed to get folks to take their full lunch break while learning more about their health.

‘What kind of chocolate are people eating?’

The campaign warns of the dangers of skipping a proper lunch with a surprising degree of pathos. Its website reads: “While it might be tempting to just fill the gap with chocolate, sweets and coffee, research suggests that it’s not the answer. Soon enough the heroic feeling gives way to exhaustion and that can become resentment.”

We had no idea that our penchant for sweet things to fill the void was bound up with so much angst. What kind of chocolate are people eating?

Former adviser to the Labour Party Paul Corrigan has gone all Gandalf on us it seems.

The previously clean shaven health stalwart was spotted recently sporting a flowing beard. Is it a Lord Of the Rings thing?

Either way, short back and sides is a thing of the past for Mr Corrigan.