End Game: The healthy way to smash through 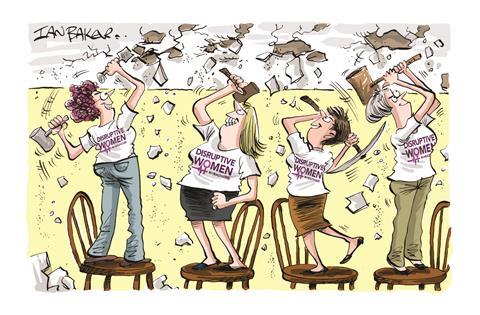 Disruptive women in House of Commons

End Game has long concurred that the glass ceiling hampering the progress of women and minority groups into the upper echelons of our grand national institutions could do with a great, good “smashing”.

So when news reached us of a new force in town with the apparent aim of helping women in healthcare break through this proverbial barrier, we felt honour bound to promote their cause.

Step forward the “UK chapter” of the “Disruptive Women in Healthcare” movement, which held its launch event at the House of Commons last week.

One can only wonder what went through the minds of the parliamentary flunkies who set up that function room. Just how far would these “disruptives” go to smash the ceiling?

But as all good management gurus will be aware, such groups are about sharing provocative ideas and “solutions” to help rather than cause physical damage.

Readers will be further reassured to find out that respected former Royal College of GPs chair Clare Gerada was the keynote speaker at the launch.

End Game hopes the windows of the House of Commons function room that hosted the “disruptive” women are still intact, but would be delighted to hear that the metaphorical disruption of glass ceilings had begun.

A whale of a hospital

Everybody loves a humorous typo - especially one that changes the meaning of something, imbuing it with unexpected amounts of hilarity.

End Game can therefore only speculate that the author of a report presented at Lincolnshire East Clinical Commissioning Group’s recent board meeting must have been distracted when the recounted a group visit to one of the area’s hospitals.

We would dearly love to take a trip to the newly styled “Diana Prince of Whales” Hospital in Grimsby. Two for the price of one.

The finest misspeak of last week’s Conservative Party conference surely goes to David Cameron, who accidentally said he “resented” poor children and aspirational teenagers, rather than “represented” them.

Jeremy Hunt also earned an honourable mention by announcing at a fringe meeting that “politicians care about the NHS” rather than “patients”, as he had intended.

Perhaps the latter is the subconscious message with which the health secretary and his political colleagues desperately need to convince the public.

Not on the spot

NHS England staff, including independent non-executive directors, were instructed they must not represent the giant quango at political party conferences, End Game understands.

Presumably this Cabinet Office order was aimed at preventing newspaper headlines about the cost of public sector lobbying.

Ironic then that it is not quite clear how this applies to Camilla Cavendish, The Times’ associate editor who sits on the Care Quality Commission board and is much admired (or at least praised) by Jeremy Hunt.

Leading a public “interview” with the health secretary at the Tory conference, CamCav appeared free to share interesting insights from her work with the CQC and on NHS funded reviews.

She was perhaps less forthcoming in putting the health secretary on the spot with difficult questions. No doubt she would test the CQC’s executive more than she challenged Mr Hunt.

Sage words from a PR

While End Game lives by the motto “everything in moderation”, our faith was shaken recently by the sage words of a certain PR person.

In the space of a paragraph we were completely won over: “Can drinking alcohol be good for your health? It turns out it can.

‘Can drinking alcohol be good for your health? It turns out it can’

People of Sardinia who drink Cannonau red wine - which has the highest antioxidants concentration - are 10 times more likely to live to be 100-years-old.”

Imagine our surprise and delight. We knew straight away this “fact” had nothing to do with genes, climate or sheer good luck.

We now plan to quaff until our livers scream for mercy (or more), safe in the knowledge that everything PRs tell us is true and vested interests are just a fairy tale.