End Game: The Hunt thief in the night

The health secretary gets one MP’s hackles up with his ‘hush hush’ foray onto enemy turf, while an irate patient throws the book at a trust over its A&E waiting times performance 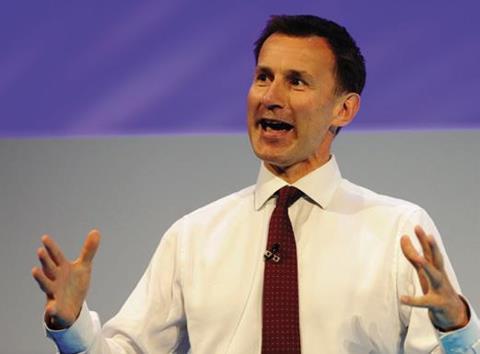 Jeremy Hunt has been accused of acting “like a thief in the night”.

MP Angela Rayner has demanded a public apology from the health secretary, claiming he has breached the ministerial code of conduct.

Late last month Mr Hunt made an official trip to Tameside General Hospital, which is in Ms Rayner’s Ashton-under-Lyne constituency. But she says he failed to tell her in advance that he was coming.

Did we mention she’s a Labour MP?

‘He failed to tell her in advance that he was coming’

She told the Manchester Evening News: “The secretary of state stole into my constituency like a thief in the night, without so much as a by-your-leave.

“He failed to notify me in advance of his visit, even though it was clearly planned at least a week in advance.

“He has not had the decency to apologise or explain why it was such a hush-hush visit, even after I raised it on the floor of the House of Commons.

“I want to see him stand at the despatch box and explain to me exactly why he did not feel able to observe the common courtesies of notifying me as the MP of an official visit to my constituency.”

A Department of Health spokeswoman apologised profusely for “any administrative oversight that led to the MP’s office not being informed separately about the ministerial visit”.

Targets do not work

Commissioners were unprepared for a tough crowd last month

Pity the poor commissioner who stepped into the provider sector bear pit to explain the benefits of commissioning and targets at the Patient Safety Congress earlier this month.

The poor chap, whom we won’t name because he’s had a horrible enough time already, was enthusiastic and a clear believer in commissioners’ ability to make targets smarter.

Sadly, non-believers from the provider side dominated the room, and some were quick to make this known.

‘The lesson here is: know your audience’

The earnest clinical commissioning group man faced down several angry providers who informed him that his talk “beggared belief”, before upping the ante: “If there is one thing we’ve learned from the Francis reports it’s that targets don’t work. Targets kill.”

End Game always welcomes robust debate on the future of the NHS but the lesson here is: know your audience.

For a quiet time

Lewisham and Greenwich Trust recently received a highly unusual letter from patient Yael Biran, who described herself as a “frustrated mother of two little boys who don’t give her a second’s rest”. The letter began: “Sorry in advance for my language, but this really upset me.”

Ms Biran described how she took herself to Lewisham Hospital accident and emergency after falling and breaking her elbow.

She had expected to be in the waiting area for the long haul, but was prepared to sit it out.

“I came armed with a book to help me pass the waiting time, actually enjoying the fact that I am going to get to read a book for a chance,” she wrote.

Instead, the hospital staff had the audacity to smash the four hour waiting target: “The bloody nurse sees me in six minutes. Six ruddy minutes! [All] I had time for was to send a text, settle down, get my glasses out and find the right page, and they bloody call me in!

‘I left home and came back in less than two hours’

“And so I don’t even bother to put anything back in the bag and happily skip to the X-ray waiting area, book in hand and glasses on top of head. I sit down and get seen within 37 seconds. B^^&@s! [sic] All done and dusted and five minutes later I skip to the next waiting area to wait for the next nurse to see me.”

She continued: “Two minutes later I get to see the next nurse who is an absolute gem and is super nice, she explains everything, gives me a sling, and a tetanus shot and sends me on my way home! Home! Bloody rubbish!

“I left home and came back in less than two hours! Seriously! [Something] must be done about this! [What] is a mum to do in order to get a few hours of quiet reading in this country???!!!”

All very jolly, but Lewisham and Greenwich should probably beware – this testimonial makes a very convincing case for the efficacy of a minor injuries unit, rather than treating such cases in a full A&E.