Beware false dawns: this will be the NHS's toughest decade

Through this decade of austerity, health will have been protected relative to other government departments. But huge challenges remain for the NHS, says Anita Charlesworth

The widely welcomed announcement that NHS England was to receive a significant element of ‘frontloaded’ funding in 2016-17 suggested that the depth of the financial crisis facing the NHS was understood.

But the chancellor’s spending review statement was a caution to beware false dawns. It confirmed the reality is that this is the toughest decade the NHS has ever faced. 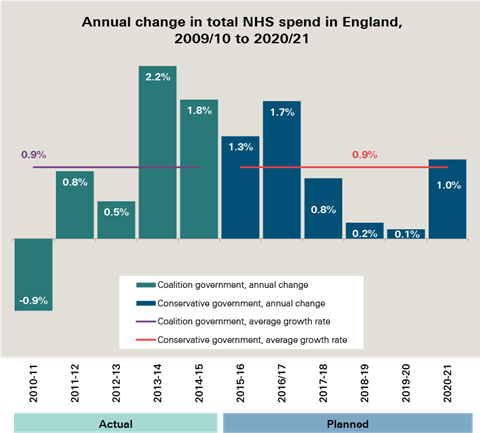 The average annual increase over this parliament is pretty much identical to the rate of increase under the coalition, at 0.9 per cent a year in real terms (2015-16 prices). This means spending per person in 2020-21 will be broadly the same after adjusting for inflation as it was in 2010-11.

Through this decade of austerity, health will have been protected relative to other government departments. But huge challenges remain for the NHS.

The increased funding will not be evenly spread. At the beginning of the decade health spending grew modestly, but from 2013-14 it has grown much faster in response to the mounting financial problems in the NHS.

Since 2012-13 deficits have grown and spread across the system, driven by mounting agency staff costs and delayed transfers of care. By the end of September more than three quarters of NHS providers were in the red – the projected deficit for the end of the year is a staggering £2.2bn.

Despite this the spending review shed no light on how the current in-year position is being dealt with. The Department of Health doesn’t currently have enough money in reserve to deal with deficits on this scale, and is already planning a switch from the capital budget this year to cover day to day running costs.

Although the capital budget has been set in the spending review for the next five years there is no guarantee it will remain at this level. As we set out in our submission for the spending review, further transfers from capital resource may be beneficial for the NHS if it is used to put the NHS on a more sustainable footing rather than just plugging holes.

Properly resourced transformative change is the only game in town now for a sustainable health service. But living off capital to cover general running costs is not a solution to the NHS’s problems.

While frontloading NHS England’s budget may have averted an immediate crisis, the medium term outlook is grim.

2018-19 and 2019-20 involve close to flat real terms funding. At the beginning of the decade the NHS managed for a couple of years with very low growth, but the circumstances were fundamentally different. Organisations were in good financial shape with some fairly straightforward opportunities for quick efficiencies. Administrative budgets could be cut and health service workers were prepared to share in the tough times with real terms pay cuts.

But that was when all sectors of the economy were going through the same experience, and five years is a long time.

Finances are now fragile and the ‘easy’ efficiency savings have been exhausted. More fundamentally, the pay and workforce outlook is very different. The service is struggling to recruit and retain enough staff, the agency problem is not going away quickly, morale is very low and private sector earnings are now picking up. This is leaving healthcare workers feeling left behind.

One of the positive reforms to emerge was that of nurse education. No one likes paying student loans but bringing nurse education into line with other degrees offers the potential of a significant expansion in the supply of UK trained nurses which is essential to deliver a sustainable service.

The spending review offered most protection to the NHS England budget. It will grow by an annual average of 1.5 per cent above inflation over the next five years. But – and it’s a really big but – the public health budget is being cut by 4 per cent a year in real terms all the way through to the end of the decade.

Cutting public health is a false economy. Best estimates are that £1 in every £5 of NHS spending is devoted to treating the consequences of poor public health – obesity, tobacco, alcohol, poor diet and inactivity. Reducing this is the big prize: lower costs, better outcomes, and a happier population able to contribute more to society.

One other way to look at the spending review outcome is to see what it means for health spending as a share of GDP. In 2015-16 the UK will spend around 7.3 per cent of GDP on publicly funded health care. The spending review means this is likely to fall to just 6.7 per cent of GDP. This really is a decade of austerity, the most austere the NHS has ever faced.