Sir Robert Naylor has said he is “delighted” at an offer from three private property firms to invest more than £3.3bn in new NHS primary care facilities.

Primary Health Properties, Octopus Healthcare and Assura say they are ready to offer £3.3bn upfront capital funding in response to recommendations set out in Sir Robert’s review of NHS estates. 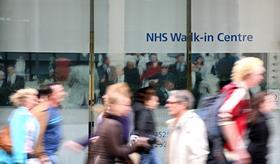 The proposal could fund up to 750 new primary care centres

They say the money could fund up to 750 new primary care centres, which would cost the NHS up to £200m a year in new rental charges.

Proposals are being considered by ministers.

Sir Robert’s report was backed by the government ahead of the general election, and estimated that 44 sustainability and transformation partnerships in England needed capital investment of £10bn, which should be funded by NHS property disposals, allocations from the Treasury and private capital investment for primary care.

Sir Robert told HSJ he was “delighted” to see “a number of proposals coming forward”, which will be reviewed for best value “in due course”.

He added: “It is encouraging to see the private sector step forward to play their part in meeting the recommendations set out in my review… with a credible plan and offer on the table for the NHS and government to respond to.

“The NHS needs a workable model for estates investment that sees genuine value delivered in the long term – the proposition put forward is clearly a step in the right direction.”

The companies’ proposed model would see GPs and other primary care providers move into specially built premises and pay rent, as the group would retain ownership of the buildings.

However, the firms say they will take the residual liability risk of the land and buildings rented to the NHS so there would be no extra charge to the health service for maintenance.

In return, the NHS would pay “less than £200m annually” in rent to the group, on top of its existing spending on rent for estates in primary care.

The level of rent would be set by the District Valuer Service, which is the specialist property arm of the Valuation Office Agency – an executive agency sponsored by Her Majesty’s Revenue and Customs.

While the NHS would be paying extra rent for primary care services, the group said it had commissioned research that showed the NHS could save more than £270m annually because the new premises would enable a reduction in non-urgent use of accident and emergency departments, remove pressure on walk in centres, and help increase GP care for the elderly.

Leases for the primary care centres would typically be agreed for 15-25 years, according to Harry Hyman, the managing director of Primary Health Properties.

Asked at what stage the proposal was at, he told HSJ: “We’re in the hands of the NHS.”

He added: “It represents an opportunity for GPs, CCGs and STPs to get private sector capital, which Sir Robert called for.

“It is important to stress it’s not a form of private finance initiative. This is a continuation of our business model where we own the properties and rent them for the period of the lease.”

The group has a combined portfolio of more than 850 healthcare facilities, most of which are for GPs.

My Hyman said: “We’re not looking at increasing rent charged on existing facilities.”

If the proposal goes ahead funding could be provided to bidders for new premises with the NHS effectively becoming the tenant with the group as landlords.

Asked what the investors would get out of the deal, Mr Hyman said: “What we get are properties let to first class tenants where we make a return and our shareholders want to enjoy the dividend that comes out of the investment.”

He said the group had held talks with the Treasury, NHS Improvement, NHS England and members of the nine most advanced STPs, and called for an “acceleration of the decision making process”.

Mr Hyman said the companies had been working on the plans since the launch of the Five Year Forward View in late 2014.

Anne Crofts, a lawyer specialising in commercial law at DAC Beachcroft, said the “interesting” proposal had the potential to get some “quick wins” for the NHS in terms of necessary investment in the primary care estate.

“There is a clear need to upgrade the current estate to provide fit for purpose premises to meet the aspirations of the Five Year Forward View,” she said.

“If this can be delivered speedily using transparent commercial structures and leases with investors accepting a reasonable degree of commercial risk for a reasonable return it may well be an attractive proposition.”

The Department of Health is reviewing the proposal.