The spread of specialised services across English hospital trusts has remained relatively unchanged over the last four years, despite a consensus that greater consolidation is needed in some areas.

Analysis of NHS England data by HSJ shows the distribution of spending on tertiary care was broadly similar in 2016-17 to the spread in 2013-14.

The graph below looks at the share of income received by 153 providers of acute specialised services. It excludes mental health. 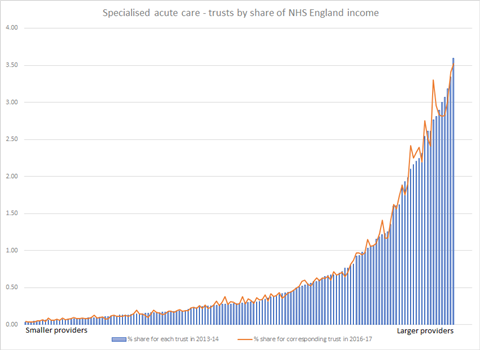 Consolidation of specialised services within trusts that run services on more than one site, which is uncommon, will not show up in the data. You can download the full data here.

Under its previous leadership, NHS England had planned to consolidate specialised services in up to 30 “centres of excellence”, saying this would improve care and save money. The medical royal colleges have also stressed the benefits of closing smaller departments.

But the national policy has been more nuanced since 2015.

In the Five Year Forward View, NHS England recognised the benefits of centralising some specialities – such as stroke, surgery and some cancer services – and chief executive Simon Stevens has referred to the “long tail of providers who are doing very few specialised services”. However, Mr Stevens and the national body have also suggested smaller hospitals can continue delivering other tertiary services if they can be supported or networked with larger providers.

Withdrawing services from hospitals is often politically difficult and unpopular with staff, but in some specialties research suggests it can save lives. There have been efforts at a national level to consolidate child heart surgery for almost 20 years, which are yet to conclude.

Analysis by HSJ in 2014 suggested around 30 per cent of specialised services in some regions failed to meet nationally defined standards. HSJ has attempted to obtain updated information on service “derogations” from NHS England but these have not yet been provided.

Alastair Henderson, chief executive of the Academy of Medical Royal Colleges, which made a high profile call for service consolidation in 2012, said: “There probably hasn’t been sufficient progress. It’s a hard and complex process that doesn’t tend to be popular especially in times of political uncertainty.

“We haven’t realised the benefits we could have done. The challenges remain the same, as many sustainability and transformation partnerships are finding.”

HSJ obtained the spending data from NHS England, which commissions specialised services, through a Freedom of Information request.

HSJ asked NHS England if whether it believed there should be more consolidation, and at a faster pace, or whether it felt the spread of services should remain broadly the same.

It did not answer this directly, but said in a statement: “Nuanced and sophisticated judgements are being taken on a service by service basis about the right balance between local care and concentration of expertise and equipment…

“This balance will often change over time - as happened for example with the diffusion of interventional cardiology from teaching hospitals to district general hospitals.”

It also cited stroke care, where some areas benefit from centralised hyperspecialist stroke units, while in others there are efforts being made to deliver modern treatments to a wider range of hospitals than at present - such as mechanical thrombectomy.

NHS England said the figures do not include spending through the cancer drugs fund, and it may not agree to the positions reported in the individual provider accounts so they should be used with caution.

Article has been updated to include data from dedicated specialist trusts.