Exclusive: Winners and losers from £3bn spent on ‘transformation’

Less than a third of the £9.2bn pot earmarked to potentially be used for “transformation” over the last three years has been used for that purpose – with more than half England’s health systems receiving under £25m.

Financial data obtained by HSJ reveals around £2.9bn has been distributed to local health systems from the nationally held fund since the start of 2017-18.

It also reveals the distribution — including that Greater Manchester received £313m transformation funding, while more than half of “sustainability and transformation partnerships” got less than £25m (see details below).

When the total funding pot was set up in 2016, and badged as the “sustainability and transformation fund”, NHS regulators expected the provider sector to reach financial balance by the end of the financial year 2016-17. This would enable more of the £9.5bn to be released, although the expected proportions were not specified.

A policy paper from NHS England at the time said: “We intend that over the five year period the split between sustainability and transformation requirements for local health economies will change. As the provider sector comes back into underlying balance under NHS Improvement’s supervision, the share of the funding available for transformation and new policy commitments will increase in subsequent years.”

But providers have reported a combined deficit of between £500m and £1bn in each year since then, with the underlying position estimated to be far worse, which has limited the amount available for transforming services. The proportion of “transformation” funding has increased marginally, however. 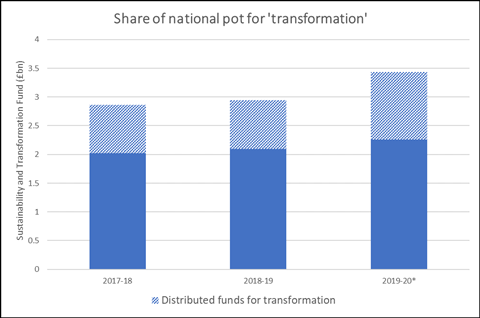 Transformation investment is usually required to test and design new care models that could save the NHS money in the longer term. One example could be investment in multidisciplinary community teams focussed on early intervention and preventing hospital admissions. Other national transformation schemes include reforming cancer care, for example.

In February, the National Audit Office said the NHS was treating more patients but has “not yet achieved the fundamental transformation in services and finance regime needed to meet rising demand”. It said years of short term financial fixes have resulted in resources being “moved away from areas of investment in the future”.

The enduring financial deficit in the provider sector has also had to be offset with capital budgets and commissioning underspends.

HSJ obtained the data from NHS England via a freedom of information request. NHS England and NHS Improvement did not respond to a request for comment.

Siva Anandaciva, chief analyst at the King’s Fund think tank, said: “It is hard to separate out the money that is used for ‘transformation’ in the NHS, but where nominal transformation budgets can be identified, it does absolutely seem like the NHS has underinvested in long-term transformation funding in order to prioritise annual day-to-day spending in recent years.

“The strategy of reprioritising spending towards day-to-day running costs was entirely understandable in the short-term as financial pressures were far worse than planned. But the long-term consequences of the approach mean that the vision set out by the Five Year Forward View, which aimed to move increasing amounts of funding away from sustainability towards transformation over time, has not been fully achieved.

“The NHS is treating more patients but has not yet fundamentally transformed services in the way that is needed.”

While one region, Greater Manchester, has received a so-called “fair share” worth more than £300m over the three years, which was part of a unique devolution deal in which it was allocated £450m over five years. Around half of the health systems in England received less than £25m over the same period.

Distribution of transformation funding since the start of 2017-18