Jeremy Hunt has acknowledged more funding will be needed for the NHS but warned he has not yet won the argument with the chancellor.

The health secretary said any boost would be dependent on the country’s “overall economic context”. 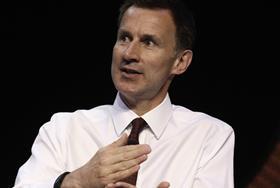 Speaking at the NHS Providers conference in Birmingham today, Mr Hunt said after years in which funding had not kept pace with rising demand, more money was clearly needed.

“I do believe that the NHS needs more funding. I think it is impossible to argue anything else,” he said.

However, he played down expectations that the NHS was in line for a major funding injection in the budget on 22 November, suggesting this was an argument he still needed to “win” with chancellor Philip Hammond.

The prime minister and chancellor were “very aware” of the financial pressures in the NHS, he said. However, he added that it was a “mistake” to think the future of the service rested simply on how much money was allocated in the coming budget.

Mr Hunt also said he “passionately believed” the NHS must continue to maintain and even improve performance standards, despite unprecedented pressures on the service.

During the conference, NHS England chief executive Simon Stevens and NHS Providers have both warned performance will inevitably suffer without a major increase in spending.

Questioned on Mr Stevens’ call for the government to honour the Vote Leave “battle bus” pledge of £350m a week extra for the NHS, Mr Hunt said this too would depend on the overall health of the economy.

“If there is a Brexit dividend, if we end up having less pressure on public finances because of the fact we are not making net contributions to the EU, then I believe the NHS should be first port of call,” he said.

As first reported by HSJ yesterday, Mr Hunt also revealed Health Education England will publish a draft NHS workforce plan covering at least 10 years, by the end of the year.

Mr Hunt said the plan, a final version of which will be publish next year, will also help make the argument for more funding to government.

“These plans will also give the chancellor and future governments confidence that as they increase funding for the NHS we are also increasing our capacity to spend that funding on better clinical care,” he said.

His comments come after the first day of the conference focused heavily on a perceived “disconnect” between the difficulties faced by the NHS frontline and the expectations of political and system leaders.

In a conference speech directly following Mr Hunt, Mr Stevens called on the government to honour the Vote Leave campaign’s “£350m a week” pledge and said the waiting list would balloon to 5 million patients by 2020-21 without additional funding.