HSJ analysis shows which trusts are performing best, and worst, against their financial plans in 2016-17.

NHS Improvement has published financial performance data for every provider for the first nine months of the year, with trusts now forecasting a year-end deficit of £873m.

This is a deterioration of £200m compared to the forecast after the second quarter of the year.

The forecasts published by NHS Improvement include payments from the £1.8bn sustainability and transformation fund, which trusts are only eligible for if they meet their financial targets.

HSJ has recalculated the forecasts after excluding these payments, to enable like for like comparisons on the underlying position.

Some trusts, such as North Bristol Trust and Newcastle Upon Tyne Hopsitals Foundation Trust, have forecast major improvements against their control total plans. HSJ has contacted them to ask how this will be achieved. 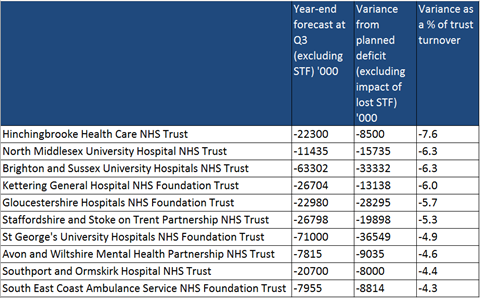 Trusts forecasting the largest surpluses, which meet or exceed their 2016-17 plan (in cash terms) 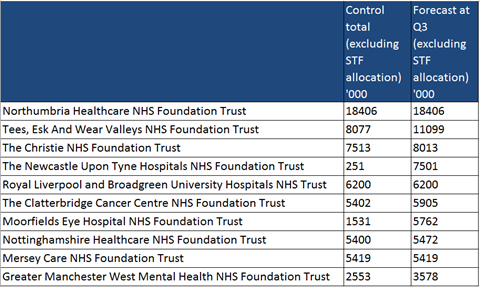 The final two tables have been amended as several trusts which did not agree their control totals were previously included. NHS Improvement’s report suggested that Newcastle Upon Tyne Hospitals FT, North Bristol Trust, Norfolk and Norwich University Hospitals FT, Plymouth Hospitals Trust, and West London Mental Health Trust had assumed STF payments within their control total plans, which skewed the variance numbers. NHSI has confirmed the plans for these trusts do not include STF.