NHS funding: What the public thinks 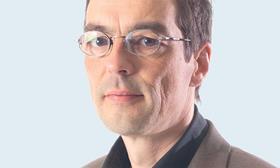 It used to be said that the British public wanted Swedish levels of public services but American rates of taxation. But is this changing? The latest results from the British Social Attitudes (BSA) survey conducted by the NatCen Social Research suggests it may be.

HSJ readers won’t need reminding quite how tough funding for the NHS has been, how performance on key targets has deteriorated and that the immediate fiscal future looks very bleak. But do the public know this? To an extent, they do.

Asked in 2014 whether the NHS faced a funding problem, 96 per cent said yes. Asked again last year and the figure remained the same. What changed however is that 32 per cent now think there is a ‘severe’ funding problem. In 2014 that figure was 19 per cent.

So the public think the NHS is under pressure financially, and increasing numbers think this is getting worse. But concern about the financial sustainability of the NHS is not a new phenomenon.

Only five years after the establishment of the NHS, the Cambridge economist Claude Guillebaud was asked to look into what were then felt to be alarming rises in NHS spending.

Policy details aside, the options are limited and include doing nothing, increasing patient charges or some combination of increased spending and productivity

This at a time when health spending as a proportion of GDP was less than half the current amount spent. And now, a new House of Lords’ committee plans to examine various aspects of the sustainability of the NHS – notably its funding.

The Lords’ committee plans to report next year. Whatever its findings and recommendations, understanding the views and attitudes of the public will be an important part of its deliberations.

While we know that the public think that funding is a problem for the NHS, an obvious next question is what they think should be done about it.

Policy details aside, the options are limited and include doing nothing, increasing patient charges or some combination of increased spending and productivity. If extra spending were to come from increased taxes (as opposed to less spending elsewhere in government) then the latest results from the BSA survey are illuminating.

Asked whether taxes and spending should be kept the same, go up (with more to spend on things like health and education) or go down, the proportion of people wanting to tax and spend more jumped 8 percentage points in 2015 compared to 2014.

For the first time in a decade there is little difference between this group and those who want to keep things the same (see chart).

When asked specifically about the NHS and their personal willingness to part with their own money, 41 per cent agreed to higher taxes. There was more support for a tax tied specifically to fund the NHS (24 per cent) than through current taxes (17 per cent).

There was less support for patient charges, such as a £10 cost to visit a GP or A&E department (15 per cent) or funding non-clinical items in hospital (12 per cent).

The public’s willingness to tax and spend 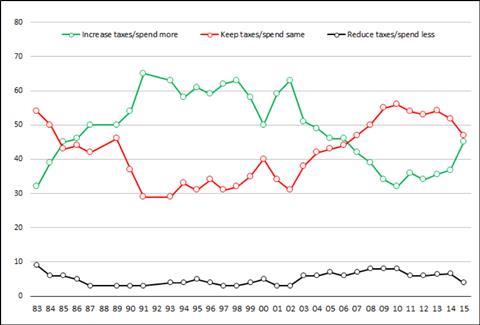 The most popular single suggestion if the NHS is short of money was simply to tell it to live within its budget (26 per cent). Nevertheless, around three quarters would agree to paying more tax or new patient charges as ways to increase NHS funding.

Despite significant (if still minority) support for increasing taxes and spending on the NHS, as Simon Stevens said at this year’s NHS Confederation Annual Conference, there is no prospect of extra cash for several years – and that in any case, may be social care has a more legitimate call on any extra money in future.

So what to do? How should the NHS respond?

A popular answer, from the public, is to tighten the threshold criterion National Institute for Health and Care Excellence apply to their evaluations; 41 per cent say the NHS should stop providing treatments that are poor value for money. This begs some questions about quite how much higher the value for money threshold would need to be.

If the NHS were to have lived within its means last year, finding an extra £2.5bn or so in cutting treatments that were of less value than others would have been a tall order.

And while a quarter would favour a purely emergency service (going too far in the other direction of cuts), 18 per cent aren’t keen on any of these rationing options.

It seems that as austerity increasingly bites into the provision of public services, but at the same time, the original reasons for austerity move beyond history’s event horizon, public attitudes to tax and spend may continue trends seen in the latest BSA survey.

If the NHS were to have lived within its means last year, finding an extra £2.5bn or so in cutting treatments that were of less value than others would have been a tall order.

So, rather than America’s levels of tax receipts, what if the UK had Sweden’s? As the chart shows, (ignoring the dynamics and knock-on effects of increasing taxes) this would mean additional revenue almost equivalent to current levels of spending on the NHS.

The economics of all this is (relatively) simple. It’s the politics that’s difficult. 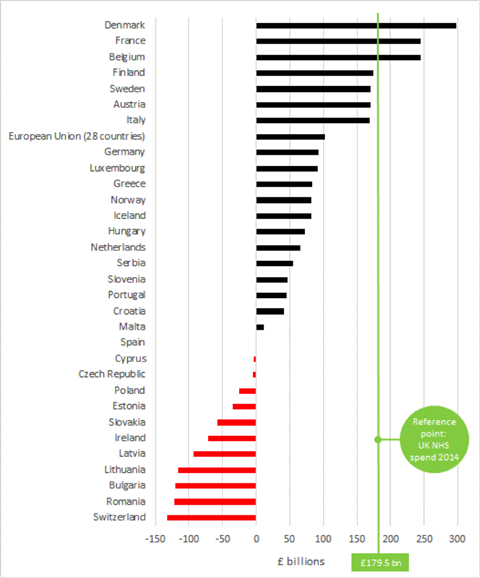 John Appleby is chief economist at The King’s Fund