NHS hit by seven-fold increase in bill for certain drugs

NHS commissioners were hit by a seven-fold increase in the bill for certain generic drugs in 2017-18, after some medicines were subject to massive price hikes.

A report from the National Audit Office, published today, reveals NHS commissioners spent £315m in 2017-18 on generic drugs priced over the national tariff, seven times more than the spend for 2016-17.

The bill relates to instances where generic drugs were not available at tariff prices, and pharmacies apply for a price “concession” that enables them to pay more.

The report outlines 10 medicines which accounted for the largest spend last year.

In one example, the report said the price of a drug used to treat mental health conditions, called Quetiapine, had increased by more than 7,000 per cent.

According to the NAO, the Department of Health and Social Care outlined three potential causes for the price increases but could not fully verify or quantify them, as it relied on voluntary information for manufactures and suppliers.

It was identified by the DHSC that a “lack of transparency from these arrangements could lead to “gaming/manipulation of…pricing or collusion between organisations in the supply chain.”

Although the government did not identify that any “gaming” had influenced drug prices, its ability to rule this out would have been limited, the report said.

The report said the DHSC could not fully explain the reasons for the increase in wholesaler’s margins. 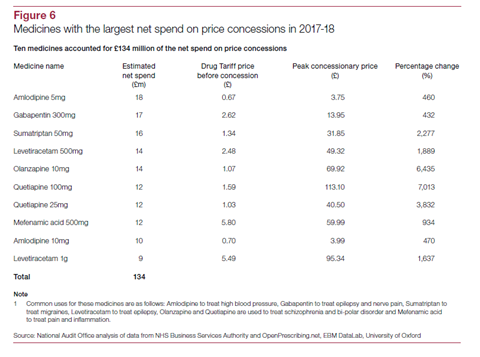