Mackey: 'We dropped a clanger' on agency staff rules

In an interview with HSJ, the chief executive of NHS Improvement said there are several large investors wanting to lend money to trusts, but the Treasury has “very rigid rules” that can prevent this happening. 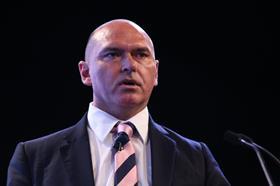 A review of NHS estates, led by Sir Robert Naylor, found at least £10bn of additional capital funding is required to deliver proposals in sustainability and transformation plans and clear backlog maintenance problems.

Mr Mackey said: “We’re not going to get a £10bn cheque, but if we could be a bit more creative about off balance sheet mechanisms and local authority joint ventures, what hits CDEL [the Department of Health’s capital expenditure limit] and what doesn’t, I think we’re in business.

“On a monthly basis, I meet between three and five institutional investors who desperately want to lend money to the NHS.

“But if they lend it and we’re very rigid about the rules then it’s just like we’re funding it ourselves and it still hits CDEL. If we just eased up a bit, and that will require a Treasury discussion and agreement, I think we’re in business.”

“I’m not in control of that, but if I was we would have an NHS Improvement investment fund. We’d raise the money privately, put some public money into it and we would deploy it into the sector against a set of priorities.

“Other sectors have managed to do it with either different or more flexible accounting treatment [but] the Treasury is understandably tight about the impact on public finances and borrowing and all those sorts of things.”

The Department of Health’s capital budget has been frozen in cash terms over the course of this parliament, and then raided by up to £1.2bn each year to plug deficits in the revenue budget.

Asked about potential pitfalls of using private finance initiative type schemes to fund capital projects, Mr Mackey said: “I instinctively don’t like very expensive PFI mechanisms, so I think if we go back into a PFI space we’d need to have learned from the last period. We need to go in with our eyes open and make sure that the profits are reasonable and get a reasonable deal out of it.”

Mr Mackey said STP discussions in some areas prompted proposals from local authorities, which have greater ability to borrow money, to fund capital projects and then rent the space to the NHS.

He added: “If we can do that and keep it off the books and that’s a solution, I think we should come from a place of making that happen.”

Mr Mackey has previously talked of some providers exploring the potential to buy out their PFI schemes, as he achieved at Northumbria Healthcare Foundation Trust, as well as an NHS Improvement “bond” to free up capital funds. These ideas were still being discussed.

Mackey: 'We dropped a clanger' on agency staff rules