Regulators are banking on a major turnaround in financial performance at many acute trusts next year to improve the sector’s bottom line – even after they have received relief funding.

NHS Improvement has now published the “sustainability and transformation funding” allocations for every provider for 2016-17, along with a methodology for how the numbers were calculated.

The allocations were issued in January, along with financial “control totals” as national bodies seek to bring the provider sector back into financial balance. About a third of trusts rejected theirs offers, however.

The target control totals have not been published, however HSJ has obtained these figures for 47 of 136 acute trusts, through trust board papers and freedom of information requests. About 40 trusts refused to provide the figures, and around 50 failed to respond.

According to the figures, seven trusts must improve their deficits by more than £10m compared to 2015-16, even once sustainability and transformation funding is factored in.

How much trusts must improve their financial position in 2016-17, according the issued targets.

King’s College Hospital Foundation Trust must deliver the biggest improvement compared to the current year – £38.9m. Its draft plan, for a £7.9m deficit, had already predicted a significant turnaround in performance. 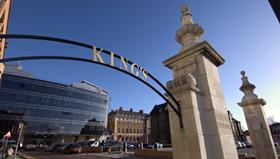 King’s College Hospital is ‘in active discussions with NHS Improvement’

A trust spokesman said: “The final details of our financial plan for 2016-17 are still being finalised, and we are in active discussions with NHS Improvement about this. We will work towards the control total once it has been agreed.”

Other trusts with challenging targets include the main acute providers in Nottingham, Cambridge and York. Calderdale and Huddersfield FT appears to have the most generous allocation.

As revealed by HSJ last month, a third of NHS providers have rejected their financial targets, which were issued in January, while many have only accepted with caveats. Those which refused their initial offers included George Eliot Hospital Trust, Derby Teaching Hospitals FT, Dorset County Hospital Trust, and Basildon and Thurrock University Hospitals FT.

There were complaints that non-recurrent income had been taken into account for foundation trusts, and updated guidance from NHS Improvement reveals that FTs were sent revised control totals.

Sustainability and transformation funding allocations have been based on emergency activity reported in the reference costs collection, while a complex set of factors has been used to set the control totals.

The guidance said the control totals reflect the “minimum” improvement in financial position that NHS Improvement expects each provider to be able to achieve in 2016-17, given their provisional allocation of additional funding.

The general element of sustainability and transformation totals £1.6bn, while a “targeted” element of £200m has yet to be allocated. The control totals are based on a break-even position for the sector once the STF is accounted for.

Trusts must agree their control total in order to access both elements of the funding. The guidance added: “NHS trusts and NHS foundation trusts should work through all possible actions that could be taken in 2016-17 to deliver the control total and safe services…

“In general terms we do not expect to amend control totals. Representations made by trusts about their individual figures will however be considered before the final allocations and control totals are confirmed.”