Technical accounting measures and “a material number of land sales” have helped NHS trusts improve their forecast deficit for this year.

A presentation document used by Elizabeth O’Mahony, finance director at NHS Improvement, says the aggregate forecast for the provider sector improved at the end of February, compared to the outlook two months earlier. 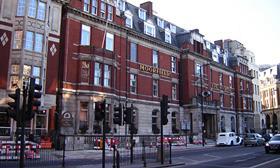 Moorfields accounts for one of the ‘material number of land sales’

The forecast at the end of December was for a sector deficit of £873m, against the agreed maximum deficit of £580m.

It is unclear how much the outlook has improved, but NHSI previously indicated that it would be possible to reduce the deficit to between £750m and £850m.

The document, which was used at regional meetings for finance directors last week and has been seen by HSJ, urges trusts to “be a bankable investment” by delivering their financial targets, and says “delivery this year sets the tone for next year’s discussions”.

It adds: “You are very close to proving the critics wrong so please work together as a sector and let’s give one final push to the year end.”

Under a heading of “further progress being made”, the document says 50 trusts are now “on track to do better than previously forecast”, while 79 providers are expecting to “do better” than their control total.

The regulator also lists a “material number of land sales being finalised” and “technical items agreed”.

Land sales boost a trust’s revenue position if the sale price is higher than the value in the trust’s balance sheet.

One-off technical accounting measures were widely used by the trust sector last year in a bid to help the Department of Health keep within its spending limit, but appear to have been used more sparingly this year.

The measures were criticised in a report by the National Audit Office, which said they did not contribute to a “comprehensive plan to secure the financial sustainability of the NHS”.

A spokesman for NHSI said: “The M11 position has improved as providers continue to work hard to mitigate their risks and to achieve the best possible financial outturn. Some of the actions taken will include land sales and technical items but this is business as usual.”