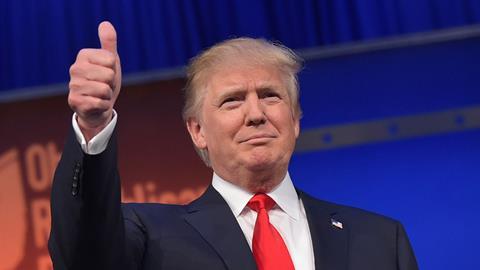 What's Trump got to do with our healthcare system? Plenty

I don’t want to sound alarmist to an NHS audience which has enough alarm on its plate as a predicted cold winter looms and unlagged pipes are close to bursting in year six of health and social care austerity.

But these are alarming times. Donald Trump has just been elected president of the United States.  So the Brexit vote in June wasn’t the major earthquake after all, just the ground-shaking early warning which makes Italian rabbits dash for cover: seismic change is coming.

Yes, I know Mr Trump’s not our new president, we didn’t vote for him or his oh-so-flawed Washington establishment opponent. And what’s it to do with healthcare anyway? Plenty, since you ask, not least the economic damage to the global economy –  think Jeremy Hunt’s budget  prospects – which braggart Trump’s promised combination of trade tariffs and high domestic borrowing (plus tax cuts) may do. We call it boom and bust. Let others worry about Putin, climate change and Mexican walls.

But as another American politician once said: “Never let a crisis go to waste.” It is common ground that both Britain’s Brexit vote and Trump’s extraordinary insurgency, much of it fuelled by ignorant anger and abuse, rest on neglect and resentment felt by millions of voters who feel left behind and fearful as the fruits of globalisation go elsewhere, leaving them in a bleak post-industrial landscape.

I haven’t been in the Rust Belt of Ohio for 10 years, but it won’t have got any better. Will Trump bring back those lost manufacturing jobs? I don’t know any serious analyst (as distinct from Brexit fantasists) who thinks he can, any more than his now-gone casinos rescued Atlantic City, America’s Blackpool. Hope is a good thing, but reality TV is not a good training ground.

Hope should incline us to assume Trump the deal maker will be a more pragmatic president than the proto-fascist demagogue we saw in the campaign. Obamacare will be an early test. Even without grotesque misrepresentation it’s flawed and the emerging risk pool has too many sick Americans among its 20 million takers, so premiums are rising.

Capping costs (as Clinton threatened to do to Big Pharma) and raising efficiency is the way forward. Surgeon/writer (and Reith lecturer) Atul Gawande demonstrated that (again) in his famous 2009 study of McAllen Texas, where unwise spending was double the US average, but outcomes worse. When a country is spending 17 per cent of GDP on outcomes that are poor by G7 standards, going back to distorted markets isn’t the answer. It’s just possible Trump may do something smarter.

Inefficiency is a British story too, as Jeremy (“money isn’t everything”) Hunt keeps saying whenever backed into a corner over flagging health and care spending – or holes are found in those truthified “extra £10bn” claims by the likes of sceptical Dr Sarah Wollaston MP.

Yes, we have neglected large chunks of society, but we have also indulged our collective indulgence via what Boris Johnson proudly likes to call “cake and eat it” attitudes

Painful though it often is, transparency on treatment costs and medical outcomes that lead to more innovative care management are part of the way forward, along with that extras money for which Tory MPs and councilors are now demanding from chancellor Hammond in his November 23 autumn statement. Remember, he’s an ex health spokesman with a social care background and pushy Surrey constituents: he gets it.

But the Trump and Brexit earthquake serve to remind us all that things can’t go on as they are: rising demand and falling revenues. One of Atul Gawande’s startling facts is that western societies will soon have as many citizens over 80 as under five. Yes, we have neglected large chunks of society, but we have also indulged our collective indulgence via what Boris Johnson proudly likes to call “cake and eat it” attitudes.

Politicians far more grounded than Trump do it when they promise more for less and propose glib panaceas like Brexit and Mexican walls or oppose hospital reorganisation in their own patch. Doctors do it when they pointlessly hand out antibiotics or refrain from telling patients to eat better and lose weight. Patients do all kinds of indulgent self harm to themselves and their kids while dumping their parents on the state.

The media (liberal media too) panders to its audiences, as when the Daily Mail bemoans “one in three kids overweight” while on the same page mocking Dame Sally Davies as “nanny in chief” for telling parents to stop kids raiding the fridge.

That game’s nearly over. We either shape up or ship out. If the future is going to be more authoritarian (Trump and Putinism are looking that way) let’s have more gym and fewer drunks or druggies in accident and emergency.

Let’s tell people my age unlucky enough to get something nasty that six months of extra but low-quality life isn’t worth £50k of taxpayers money, insurance company’s money either. Better still, let’s tell it to ourselves and try to die with grace. If humanity doesn’t act we’re reaching a point where cost-conscious supercomputers may decide to do it for us.  Come to think of it, President Trump giving Nigel Farage a job may be the last straw which makes them switch us off.

Michael White is a former political editor of The Guardian