Lessons from Japan: Tackle the dementia challenge by supporting carers

In Japan, communities recognise that support and care for the families of those living with dementia is essential, as Mayumi Hayashi discovered 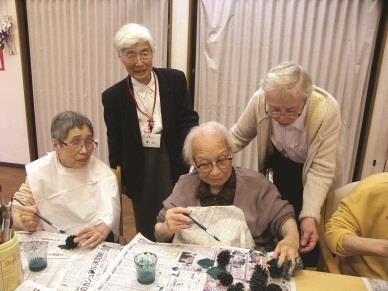 In October we went to Japan on a fact finding mission: to understand how Japanese society was responding to the challenge of 4.6 million people living with dementia (15 per cent of the over 65s).

Our first stop was the Alzheimer’s Association in Kyoto, with 885 volunteers managed by a staff of mere eight paid people.

Its focus is to develop “tsudoi”– open and informal meetings for people with dementia and their carers to generate information sharing, companionship and peer support. In 2013, a total of 3,517 tsudois were held – with 44,118 people attending nationwide.

Our next stop was a “Sakura-chan”, or “open house”, in Kobe: a privately rented dwelling opened up to receive dementia patients and their carers for lunch, and providing a base for other social activities such as day trips and dementia awareness education.

In addition, carers were offered respite by peer carers in a planned manner. The manager, unpaid like all her assistants, had introduced a 24 hour care helpline to support carers.

‘It is not only those living with dementia who need the care and understanding, the empathy and support’

The next day we went to Tokyo’s biggest borough, Setagaya-Ku, known for providing rapid response to support those recently diagnosed with dementia – and their carers.

We also noted the successful co-partnerships with community groups and voluntary organisations.

Grants were available and allocated non-competitively; there was an emphasis on future self-sufficiency and co-production on an intergroup and peer group support basis.

This model has successfully launched a variety of initiatives including carers’ cafés and community “bars”, which welcome and support carers and those in their care.

That night, we visited an “Arajin” bar – opened up next door to a GP’s surgery. We were moved by the open-to-all “exchange notebook”, which recorded simple two-line messages – or full page cries for help – written by carers in their moments of distress.

The concept, incorporates what is both social enterprise in principle (the café / bar makes a operational profit) and a platform for integrated support.

The next day we visited “Katarai-no-ie” – a public, specialised dementia day centre in the “friendly environment” of an ordinary house – again in the Setagaya-Ku residential area of Tokyo. This day centre offers eight hours of specific dementia related care and activities for up to 12 people.

We were offered lunch prepared by people with dementia. Food – preparing, eating and enjoying – seemed to play a huge role in Japanese care and support initiatives. We noticed the absence of carers. They were enjoying a day’s respite, we were told.

Our sojourn continued to Tama (a Tokyo suburb), known for its mascot Hello Kitty. Here we were shown two initiatives, which are already widespread across Japan.

First, the neighbourhood watch style scheme (not related to crime prevention but with similarly organised local networking) which looks out for “wanderers” – those among the 10,300 nationally recorded people with dementia who stray from home in their confusion.

Then we were shown the Tama grassroots and flourishing “dementia friends” scheme – again, part of a 5.4 million national cohort.

After that, we headed for the dementia care unit at the Japanese Ministry of Health, Labour and Welfare.

Here we learned that they had two guiding principles for underpinning dementia care and support nationally: the avoidance of even a “light touch” Care Quality Commission style inspection framework; and support for carers.

This essentially pragmatic and humane approach ensured the proliferation of so many informal, but seemingly effective, innovations.

Our final visit was to the “Suzu-no-ya” – another example of the “open house” based in residential surburbia. In this rented house, a charismatic manager and her volunteer team welcome local people with dementia and their carers to lunch and companionship – within an informal environment.

In addition, “Suzu-no-ya” volunteers run a 24 hour care helpline for carers together with preparation for possible bereavement and post-bereavement counselling. This support was always provided on a peer support and voluntary basis.

For instance, one carer we met was something of a tragic survivor. After caring for his late father, who suffered from dementia, he had to quit his employment and care for his mother who was also living with dementia.

He wrote a book about his onerous experiences – the fear and the isolation – but not before actually losing self-control and harming his frail mother.

Peer support and the nurturing care of “Suzu-no-ya” volunteers helped him through his personal crisis.

It is not only those living with dementia who need the care and understanding, the empathy and support.

Family carers also need this response. Maybe more so, a challenge Japanese communities seem to be both recognising and responding as we discovered on our trip.